Ike Ekweremadu, deputy senate president, led the Peoples Democratic Party (PDP) senate caucus to a special dinner, which President Muhammadu Buhari held for members of the upper chamber on Wednesday. The event, which held at the banquet hall of the presidential villa, also had senators from the ruling All Progressives Congress (APC) in attendance.

Unlike a similar meeting that Buhari hosted for lawmakers in October, where few PDP senators were present, lawmakers from the opposition party, were well represented at Thursday’s dinner.

Godswill Akpabio, minority leader of the senate; Philip Adudua, deputy minority chief whip; Abiodun Olujimi, deputy minority chief whip; Andy Uba, (Anambra) Stella Odua (Anambra), Theodore Orji (Abia), Peter Nwaoboshi (Delta), were at the programme. Buhari sought the cooperation of the legislators for the 2016 budget, thanking them for the role they played during the screening of his cabinet members. Making reference to the boost that the country enjoys in the international community, the president emphasised the importance of infrastructural development. 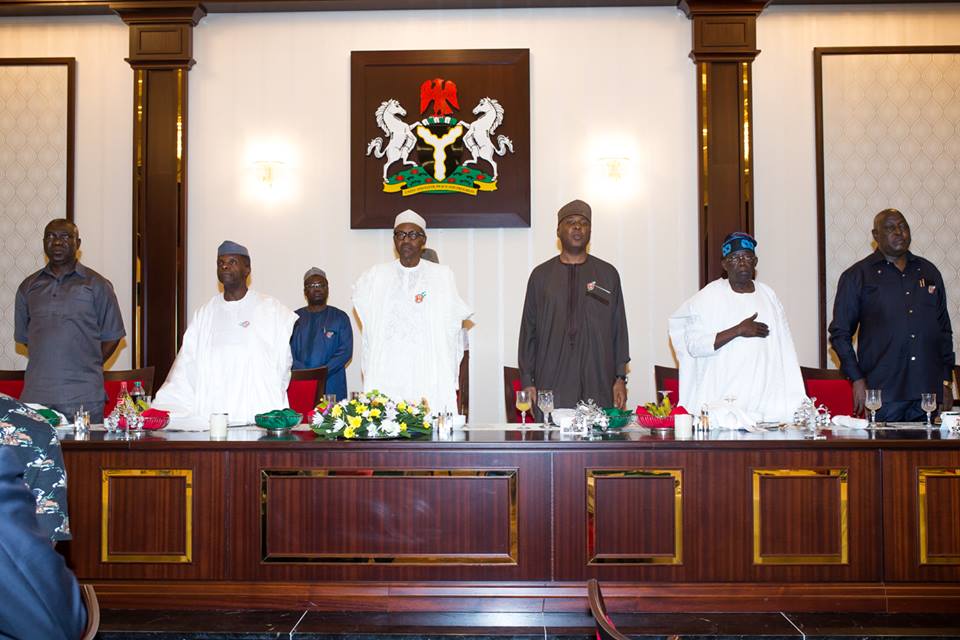 “Nigeria now enjoys goodwill from within and the outside the country,” he said.

“Look at the agreements that were made five, six years ago on infrastructure. Look at how generous those countries were, especially China, and see how we can get funding.

“If we can also get the railways working, we will safe a lot of lives and we will save a lot of fuel.”

The senators exchanged banters and chatted heartily. Senate President Bukola Saraki received a standing ovation for his brilliance while introducing his colleagues. Saraki identified them easily and did not struggle to recollect their names. Vice-President Yemi Osinbajo, Babachair Lawal, secretary to the government of the federation, and Bola Tinubu, national leader of the APC, were also at the event.