Lamar Odom is fighting for his life after suffering heart failure at a brothel in Nevada following a weekend of partying and popping pills containing an herbal Viagra substitute.

The professional basketball player was at Dennis Hof’s Love Ranch South in Pahrump when the incident happened on Tuesday afternoon, days after he first arrived on Saturday.

His ex-wife Khloe Kardashian as well as her sister Kim and mother Kris Jenner are by Odom’s side, and a representative for Khloe called the ranch to go gather Odom’s belongings according to Hof.

Scroll down for videos 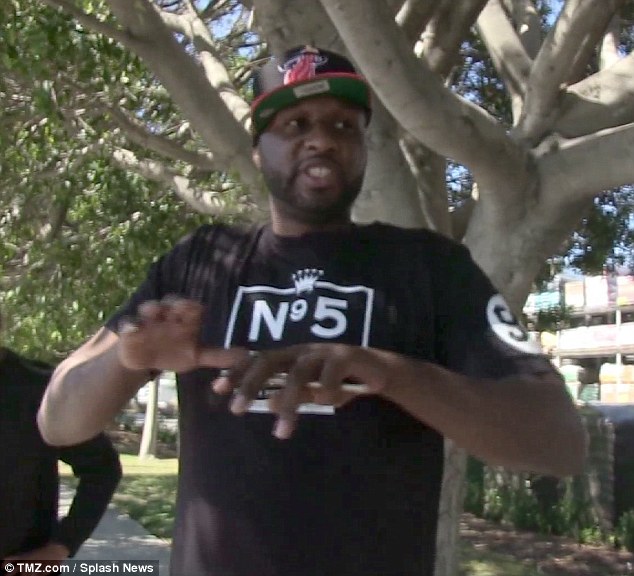 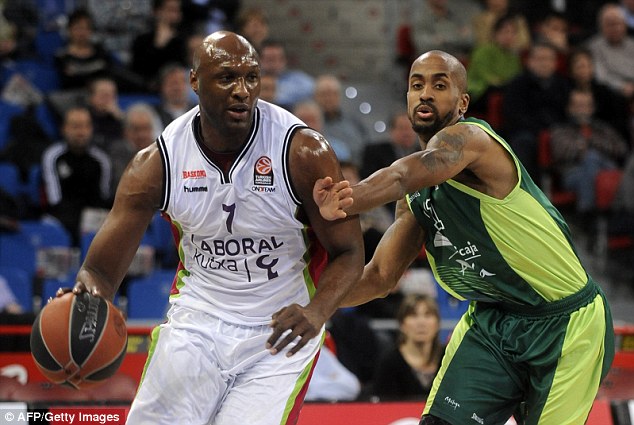 Lamar Odom (above in February 2014 in his last baseketball game playing in Europe) was found unconscious in his room at Dennis Hoff’s Love Ranch South in Pahrump, Nevada Tuesday afternoon

TMZ reports that the 35-year-old’s is also in a coma as his lungs and kidneys suffer serious problems.

He was discovered in his room unconscious by ranch workers Ryder Cherry and Monica Monroe who immediately called for a manager.

Cherry describes herself as a booker at the ranch while Monroe is thought to focus on ‘high end’ clients.

of told DailyMail.com that an employee turned the basketball player over and discovered liquid pouring out of his mouth and nose.

He was taken by ambulance to the Desert View Hospital hospital, where doctors intubated the basketball player but he did not regain consciousness. 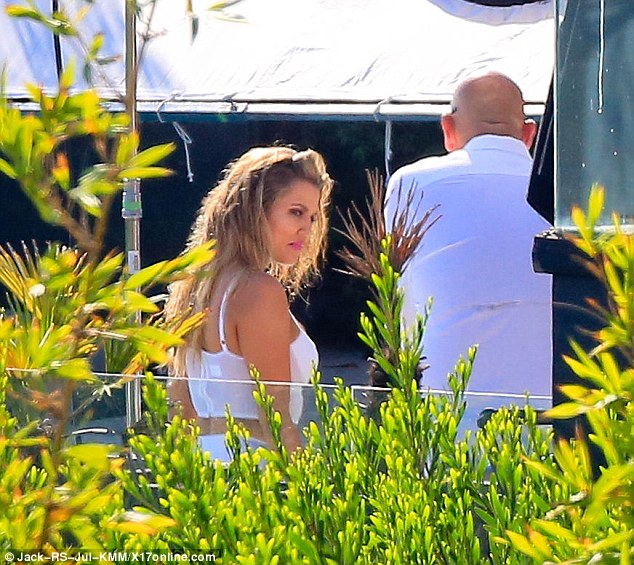 As Khloe Kardashian posed for a sultry lingerie shoot in Beverly Hills, her ex husband was found that same day unconscious at a brothel in Nevada on Tuesday 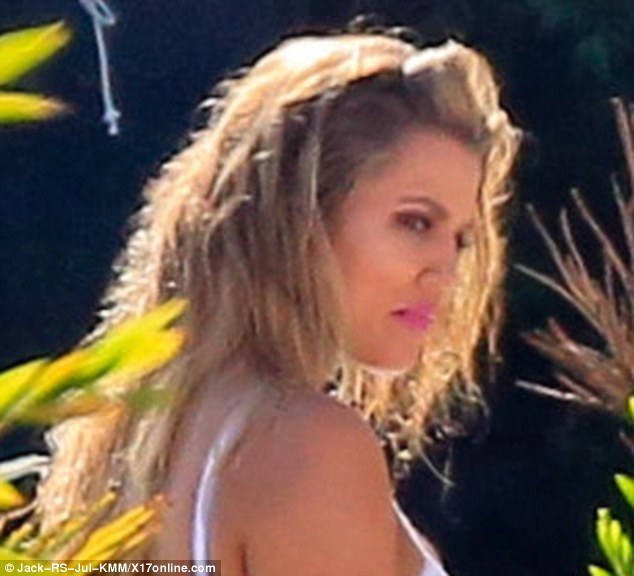 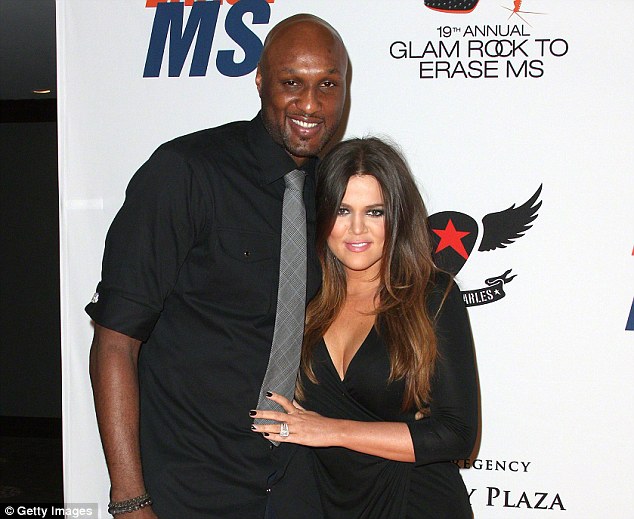 Odom is the estranged husband of Khloe Kardashian (above in May 2012), who filed for divorce in 2013 after marrying Odom in 2009

The Nye County Sheriff’s Department said he was then taken by another ambulance to Sunrise Hospital in Las Vegas because he was too tall at 6’10” to be airlifted.

A female worker at the ranch last saw Odom at around 6am on Tuesday morning said Hof.

He had ordered a bottle of cognac when he arrived over the weekend but had not finished it when he was discovered unconscious on Tuesday.

Hof said there were no signs that Odom had been doing drugs other than the herbal Viagra substitute. 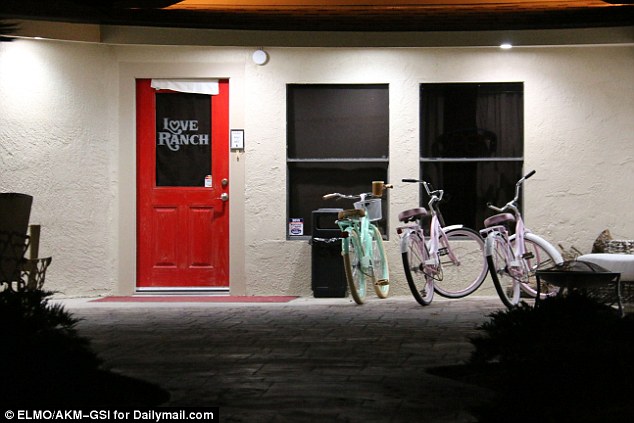 The Love Ranch in Pahrump, Nevada, where Lamar Odom was found unconscious by two ranch workers before being rushed to hospital 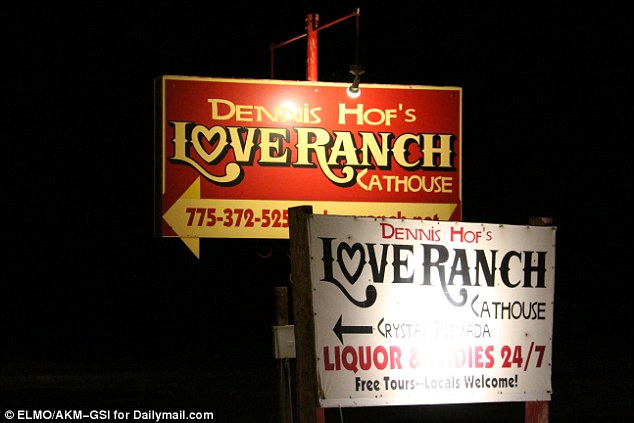 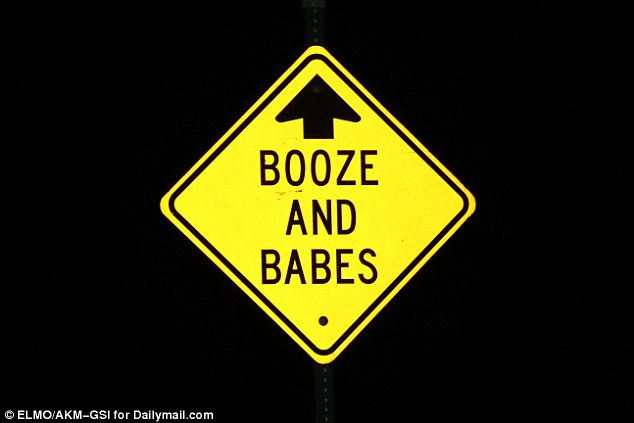 A sign outside the brothel where Odom was found. Mr Hof estimated that Odom had possibly taken 10 herbal Viagra substitutes

‘It’s terrible. You got people, the girls that found him, out here that are very upset,’ said Hof.

Hof estimated that Odom had possibly taken 10 of the herbal Viagra substitutes but would not say if the athlete was a regular at the establishment.

However, the basketball star’s estranged father Joe has spoken out, saying he believes that his son was drugged. 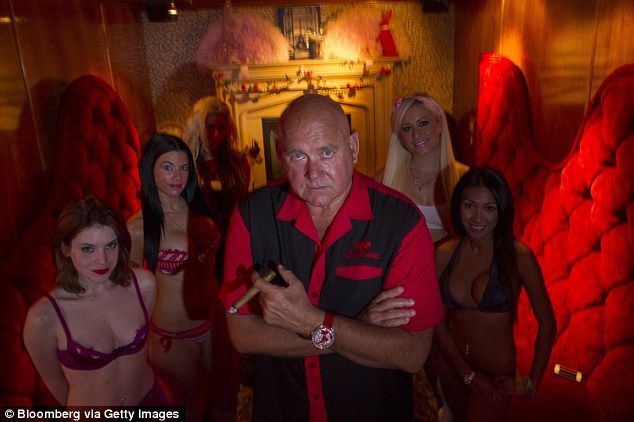 Dennis Hof, pictured, owner of the Love Ranch in Nevada says that two of his workers found Odom unconscious 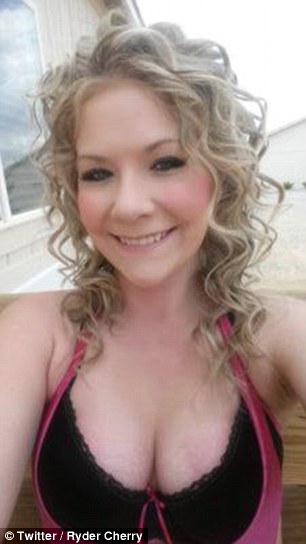 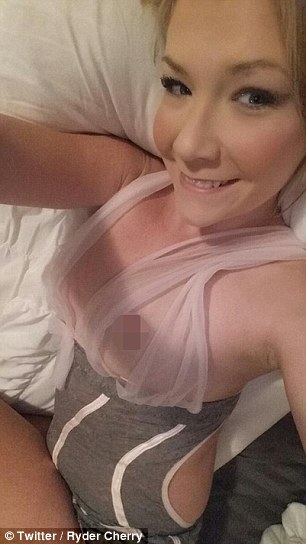 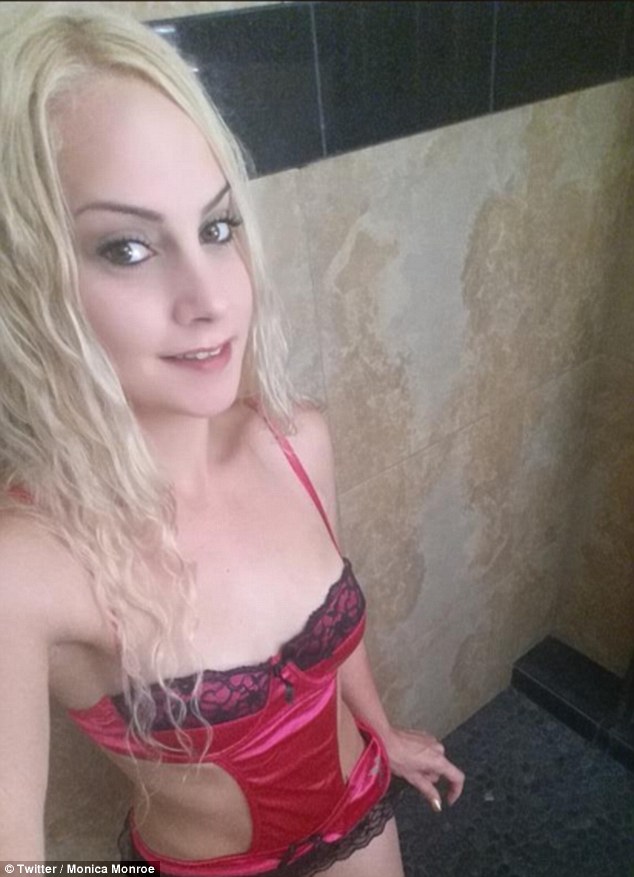 Monica Monroe (above) was with Ryder Cherry when they discovered Odom

He told Hollywood Life: ‘Somebody drugged my son. There’s no way he’s down there partying crazy like that. No way. I knew something was wrong because I’ve been calling him all day and he hasn’t been answering.

‘I need all his fans to send him well wishes. If Khloe knows anything about this, please, tell her to call me. We all love Lamar and want him to pull through this.’

Odom is a two-time NBA champion and won a Bronze medal at the 2004 Olympic in Athens. 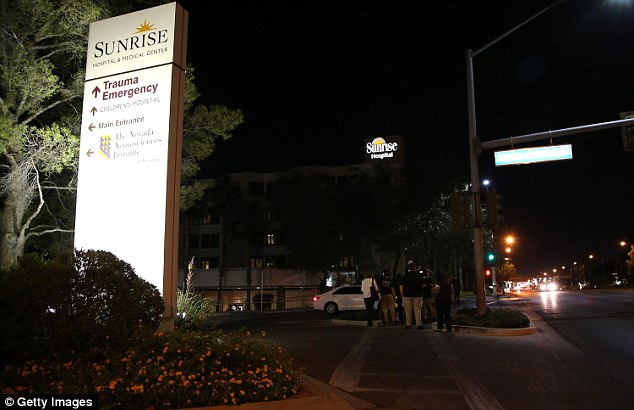 The Sunrise Hospital and Medical Center in Las Vegas, where Lamar Odom is currently being treated with his ex-wife Khloe Kardashian at his side 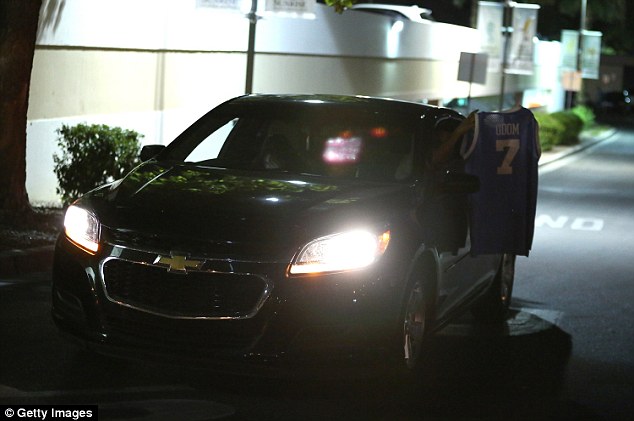 The Los Angeles Lakers cancelled practice on Wednesday following their preseason game on Tuesday, and it seems likely players like Kobe Bryant may travel to see Odom.

The Lakers played at the MGM Grand in Vegas on Tuesday night.

Reed Cowan of News 3 Las Vegas spoke with Odom’s trainer outside the hospital who said Odom had been training hard and dropped 35 pounds, but that things would go wrong when Odom spoke with his ex-wife.

‘The last really big thing was when [Odom] and [Kardashian] was texting each other back and forth about seeing each other, resolving things and then when he finally got there … It was really bad. It wasn’t good,’ said the trainer.

THE DANGERS OF HERBAL VIAGRA

Earlier this year, the Food and Drug Administration learned that herbal supplements that labeled themselves as all-natural substitutes to Viagra actually contained Viagra or similar drugs such as Cialis.

In some cases, they contained more than twice the amount than one pill of Viagra. This happens because supplements are not looked at as closely as prescription and over-the-counter drugs, meaning there is little oversight into what is going in to them.

This can be deadly for some when it comes to Viagra, as individuals who take blood pressure medication can be killed by mixing it with Viagra.

Meanwhile the NBA star’s former team the LA Lakers released a statement saying they had no other information and that none of their players had been in contact with Odom.

In 2009, Odom married Kardashian after a whirlwind romance, but by 2013 Kardashian had filed for divorce.

TMZ said at the time that Kardashian’s decision to file for divorce was the result of Odom’s usage of ‘hardcore recreational drugs.’

Later that month Odom was arrested for DUI and refused to be tested, resulting in a one-year suspension of his driver’s license.

He entered a rehab program shortly after but left just 24 hours later.

The divorce was finalized this past July.

The Kardashians have yet to comment on the incident but Kylie Jenner did abruptly end a live stream she was doing on Tuesday evening, writing on Twitter; ‘Had to end my live stream. I love you guys.’

Despite the pair’s divorce the two still spoke, with Kardashian’s phone conversations with her ex the focus of an episode of Keeping Up With the Kardashians just two weeks ago.

Odom has two children from a previous relationship with Liza Morales; Destiny, 17, and 13-year-old Lamar Jr. 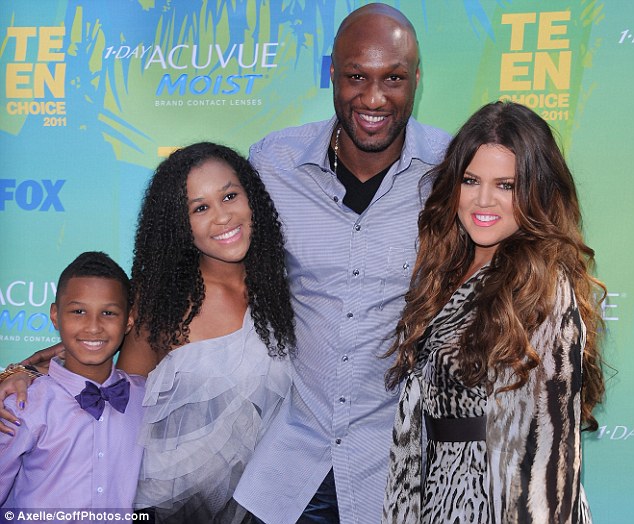 The couple had a third child, Jayden, who died at 6½-month-old from SIDS.

Odom was reportedly partying at the ranch alone the past five days, without any of his friends. Prostitution is legal in Nevada.

His NBA career has deteriorated over the past few years, and he was waived by the New York Knicks in July 2014. 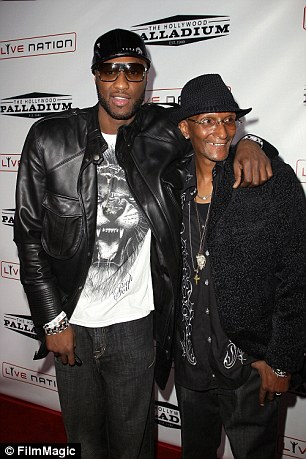 Lamar Odom with his father Joe in 2008. Joe says he believes that his son has been drugged after being found unconscious

Odom was also seen confronting Kardashian this past August shortly after the pair divorced, ambushing her early in the morning as she headed into a workout.

TMZ reported that Odom screamed at Kardashian demanding she speak to him as she tried to make her way into a Soul Cycle class.

She ignored Odom who then grabbed her arm as she screamed; ‘Get off of me, get off of me. Stop. Stop.’

When someone asked Kardashian if they should call the cops, Odom yelled at the individual; ‘You’re not going to call the cops on Lamar Odom.’

Kardashian that ran to her car and drove away from the scene.

He was interviewed by TMZ shortly after and said; ‘It’s hard for me to keep my composure, to everybody that I know and that supports me I’m sorry but that’s it, the dog has to fight back.

‘Ya’ll beat me down, degraded me, said I would do everything in the world. I’m a womanizer, a f**king drug addict, everything. I probably couldn’t even get f**king hired at Home Depot right now because of how people look at me, it’s over…If it happens again I will air everything out.’

In June, Odom’s best friend Jamie Sangouthai died at the age of 37 as the result of a flesh-eating disease caused by dirty needles.

Odom appeared to be doing well of recent, having started a new Instagram account just a few weeks ago and posting old photos and videos of himself playing basketball while also showcasing his healthy eating habits by sharing meal pictures.

One of those photos showed him playing for the Los Angeles Lakers when they won the NBA Championship.

‘Feels just like yesterday,’ he wrote next to the picture.

Khloe meanwhile had shared a photo of some of the books she was reading just before the tragic incident, including Black Butterfly.

Barnes & Nobles writes that author Robert Drake penned the book ‘for those who have lost someone in death and in life.’

Odom had a difficult childhood but still managed to excel at basketball.

His father was a heroin addict and his mother died of colon cancer when he was just 12-years-old, but despite all this he went on to play basketball at the University of Rhode Island and then went pro.