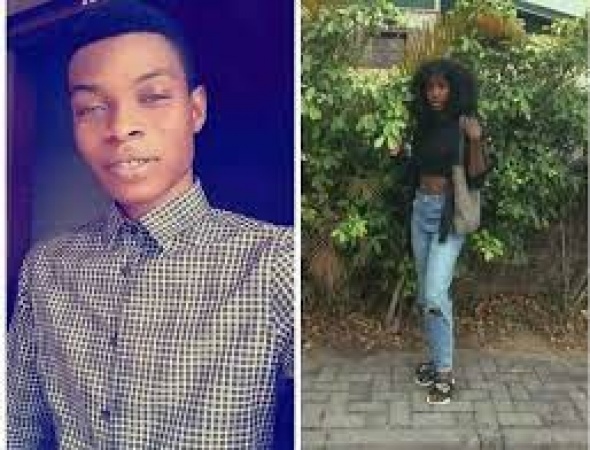 Had Catherine Oguoh, popularly known as Kate, known that death was lurking in the corner, she would have avoided confronting Joseph Fekala over his indebtedness to her.

Fekala, a youth pastor with Christ Embassy, Yenagoa, Bayelsa State, whom Kate, a friend of his sister, shared an apartment with in Okaka area of Yenagoa metropolis, reportedly owed the deceased N50,000.

But if the 26-year-old Kate, owner of KTO Fashion on Ebis Mechanic Road, Yenagoa, had the premonition that last Thursday, July 28, 2022 was going to be her last day on earth, she would have held back her humble request that Fekala pay her N50,000 debt.

Kate, said to be a graduate of Novena University, Delta State, was strangled to death as her suspected killer (Fekala) closed her mouth and held her neck tightly until she gave up the ghost.

Fekala, probably in a desperate bid to conceal the gruesome murder, went out to borrow a shovel and used it to bury Kate in a shallow grave in his bedroom, which eventually gave him away, leading to his subsequent arrest by the police.

Before his apprehension, the suspect initially denied knowledge of the whereabouts of his victim when Kate’s mother came around the house to inquire about her daughter. It was Kate’s mother’s alarm that drew the attention of the neighbours which led to his arrest by the police.

Father of the deceased, Sir Dick Oguoh, had told reporters at the Bayelsa State Police Command in Yenagoa that her daughter left the house to visit her friend and younger sister to the suspect who lives in same apartment at Okaka community.  He said they became uncomfortable when Kate’s mother was not able to reach her on the phone, saying that when they visited the house at Okaka, they became suspicious and decided to report her disappearance to the police after the suspect initially denied seeing her.

He noted that it was in the process of launching a formal complaint to the police that he received a call of the unfortunate death of their daughter.

The Commissioner of Police in the state, Ben Okolo, described the incident as sad, saying that the Homicide Department of the command was sent to exhume the body in line with police procedure to immediately commence investigation and prosecute the suspect.

CP Okolo further advised residents to be security conscious and avoid bad company and warned parents to always monitor and guard their children to avoid sad incidents of that nature.

Fekala, who was this week paraded at the state police command over the killing, has recounted how he murdered the young lady.

The suspect said he and Kate got into an argument over the N50,000 she sent to him to help in Forex trading.

He confessed that he choked Kate to death but said he did not have any motive of using her for ritual purposes.

The suspect said: “We got into an argument over the N50,000 she sent to me for the supposed forex trading she wanted to do. I tried to explain that I had spent the money and that I would repay her but she angrily responded and pushed me.

“So, I pushed her back and she fell on the bed, and since I knew she was going to raise the alarm and our neighbours would hear her voice, I held her throat and closed her mouth and choked her to death.

“After I noticed she had given up, I went out to clear my head. As I was walking, a thought came to me that I should just bury the body so that everything would just end.

“I borrowed a shovel around, I looked for the portion of the house that wasn’t too hard, I dug it and left her inside the pit.

“The fear of getting into trouble made me not to report to the police. I am not a ‘Yahoo Yahoo’ boy and I didn’t kill her for rituals.

“The following morning, her mother came around and said she was looking for her daughter, and that was the first time I had seen her because I was not always at home because of new work I got in Port Harcourt. Her daughter probably gave her the spare keys to the house. She came the night before the incident but didn’t meet me.”

The murder of Kate in cold blood by Fekala has continued to generate a lot of reactions and condemnations by friends and mutual friends both on the Facebook and in real life.

A friend of the deceased from her Ogoinbiri community in Sagbama Local Government Area of Bayelsa State said the psychological truth in the matter was that Fekala defrauded the lady because some of those engaged in forex trading are out to scam people.

The friend, who gave her name only as Preye, said: “Some of these guys who do Forex business are fraudsters. Sometimes, they will tell you if you start with N20,000, you will receive N40,000 in one hour, if you start with 50k, you will get 100k and vice versa.

“Sometimes also, they will tell you that you will get double of what you spent. This boy would not have told the girl the risks involved and all of that and still insisted on continuing. The suspect’s statement was just a cover up of the main truth which investigations will reveal.”

A mutual friend on Facebook, Gospel Otsu, said the suspect had murdered sleep and he does not deserve to sleep.

He said: “This murderer is not supposed to be taken to prison in the name of going to jail. What is good for this kind of person is immediate judgement. Immediately one is found guilty of killing fellow human being created by God, one deserves to die. There should be no further ceremony, especially as he has confessed to the killing and not under duress.”

As for Prince Okoye, he dismissed the one-sided story of the suspect, especially when the dead can’t speak for itself.

He said: “The suspect’s explanation does not hold any water. No matter the level of provocation, you don’t have the right to kill another person.

“Life is sacred and the suspect deserves to be killed the same way he killed her. He who kills by the sword, will surely die by the sword.”

Yet, another Facebook user, Henry Henry, said: “I don’t believe this super story will help you (Fekala).

“For ordinary 50k, you killed your fellow human being. It is not that you are not working. You are simply wicked and stop telling tale by the moonlight. If you killed her unintentionally, how come you hid the dastardly act from the police and the parents? You are a bad example to Christianity.”

BREAKING: Akpabio Dragged To Court Over Failure To Pay For Rented Crowd