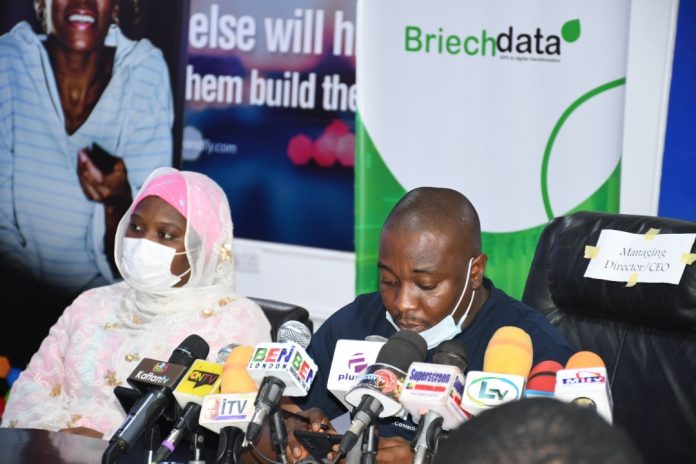 …Says Nigerians Can Subscribe At N1/N2 Per Channel Per Day

TSTv in a media engagement and facility tour held at its Office, situated at TSTv Teleport and Briech Data Center in the sprawling Idu Idustrial Estate of the FCT, Abuja, yesterday, 3rd January, 2021, told Nigerians to expect excellent services across the country.

Speaking after being introduced to Journalists by the company’s Head, Corporate Affairs, Mr. Demola Olarewaju, the Managing Director and CEO of TSTv, Dr. Bright Echefo said TSTv is a pay Television, that has come to offer Nigerians Pay Per View service on satellite television. This he said will enable Nigerians pay for only the channels they want with the additional option to pause the subscription when they are away from home. He emphasized that, beyond the opportunity to watch only the channels you want, you can pause your subscription and go about your business.

Dr. Echefo said instead of putting Nigerians across different bouquets as operated by other Pay Tv Providers, TSTv offers Nigerians the option of choosing their own bouquet, by selecting their preferred channels themselves. He noted that a situation where the best channels are in the premium bouquet which cost as much as (N16, 500) sixteen thousand Five Hundred Naira per Month put premium Satellite Tv Channels out of the reach of many. He said TSTv gives Nigerians the choice to watch local and international channels with as little as One Naira (N1) and Two Naira (N2) per channel per day respectively. He said a situation where a few channels on the lower bouquets do not contain your preferred channels forces subscribers to go for the higher bouquets that contains their preferred channels will be a thing of the past with TSTv’s offerings.

For example, he said, if you decide to select 10 of your preferred Channels at (N2) Two Naira per channel per day, that will mean you will pay (N20) twenty Naira for ten channels per day and N600 (Six Hundred Naira) per month for that subscription. This is unbelievably pocket friendly. He said you can even have a smaller subscription if you for example, pick 2 channels for the children, two for the wife and 2 for the father of the house. In this case you will pay less than six hundred Naira per month.

Dr. Ochefo explained that, when you buy your Decoder Box and after the initial one-month free subscription, you can top up your account/Decoder Box with N200, N300, N500 or N1, 000 Vouchers. He said you can even pay through your bank account as TSTv has activated all means possible for subscribers to be able to recharge their decoders. He said one unique thing about TSTv Decoders is that, they work with Vouchers just like you recharge your telephone networks. He said you can buy any amount as little as One Hundred Naira (N100) and that this will make life easy for a larger number of Nigerians. He said also that if you are travelling, for example, to the village for a few days, you can pause your subscription for the period you are away. He said TSTv is everywhere, it is open to everybody and you can use it anyway you want.

The TSTv Decoder has unique numbers like the chip number and the serial number. Any one of these numbers can be used to activate the decoder box. He said it is also a PVR, which is exactly the technology you have on the highest box that their competitors have. He said you can pause, rewind, record video and do all the things you want to do. So TSTv is giving its subscribers and would be subscribers everything in a tiny box small enough to fit into their pockets. He said it is also affordable and easy to use.

Other features of the TSTv decoder is that, there is a permanent label of TSTv on your screen every time. You can download the TSTv App on your phone from Google Play Store. Just search for TSTv Companion and download.

Dr. Echefo thanked the National Broadcasting Commission (NBC) for its support from their pre-launch, launch and post launch stages. He said they were given a level playing field by the NBC and for this they are most grateful and will not disappoint the NBC and Nigerians. He practicalized the operation of a decoder for journalist to have an on-hand experience.

On the question of whether TSTv can sustain its efforts in the market with an extremely low-price regime, Dr. Echefo said it can be sustained. He noted that even though they had challenges which everybody is familiar with in the past, they are here to stay stronger and better. He again thanked the government that has supported them immensely to make sure the brand survived those challenges. He also thanked NBC for its support over the period.

In her reaction, the representative of the National Broadcasting Commission said TSTv is our own Nigerian Brand and we must do everything necessary to support it. She urged Nigerians to support the brand as they have put in place world class infrastructure and technology that will make Nigerians proud.

Other services provided by TSTv at it Data Center apart from holding its subscribers’ data in a safe and highly secured environment is the hosting of data Center services for organisations. According to Jennifer Ogbano, the Data Services Manager, this means that, if an organisation or office has applications and servers, TSTv takes off the capital and operations expenditure from such organisations by hosting their servers and applications while the client works seamlessly in their offices.

The Head, Corporate Affairs, Mr. Demola Olarwaju in conclusion said the TSTv decoder can be installed by any satellite dish installer and If there are any problems during installation, subscribers should please call their Customer Care Centre on 09-9040-900.

This writer is of the view that the effect of TSTv’s low price per view on satellite television will have the same drastic effect that per second billing had on telephone charges in Nigeria’s telecoms industry at its early stage when Globacom dramatically initiated per second billing, which eventually forced other network providers to change from their unrealistic per minute billing.