U.S. reality star Yolanda Foster has revealed her children Bella, 18, and Anwar Hadid, 16, have been secretly battling Lyme disease for over three years.

The 51-year-old, who was diagnosed with the debilitating condition in 2012, was honoured at the Global Lyme Alliance Gala in New York City on Thursday, telling the audience her ‘babies have been struggling in silence’ with the disease.

Addressing the crowd in an emotional speech, Yolanda said: ‘When my two youngest children, Bella and Anwar, were also diagnosed with chronic Lyme disease in early 2012, watching my babies struggle in silence in order to support me in my journey, struck the deepest core of hopelessness inside of me.’

Lyme disease is a bacterial infection spread to humans by infected ticks, which are found in woodland areas and on pets. When ticks bite into human skin, the bacteria Borrelia burgdorferi infects the person’s body. Sufferers usually experience a circular rash, muscle pain, joint pain and flu-like symptoms after infection.

The news comes just weeks after British Phones 4U billionaire John Caudwell revealed that the condition has ripped through his entire family, affecting himself, his ex-wife and their three children.

The two high-profile cases on both sides of the Atlantic are certain to reignite the medical debate whether or not the disease is genetic. 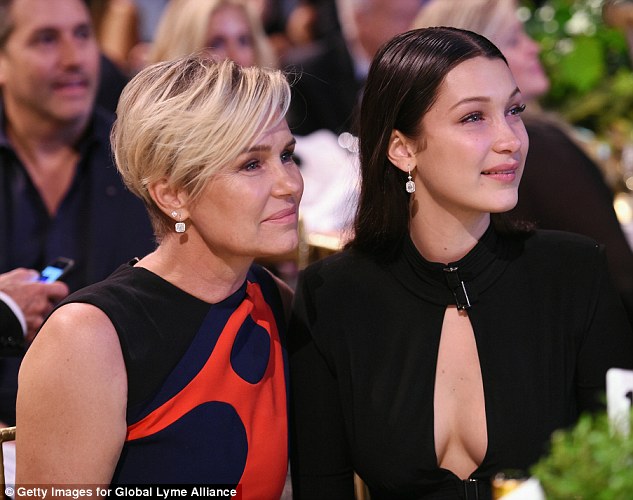 Emotional: Yolanda Foster has revealed her children Bella (pictured) and Anwar Hadid have been secretly suffering from Lyme disease for over three years 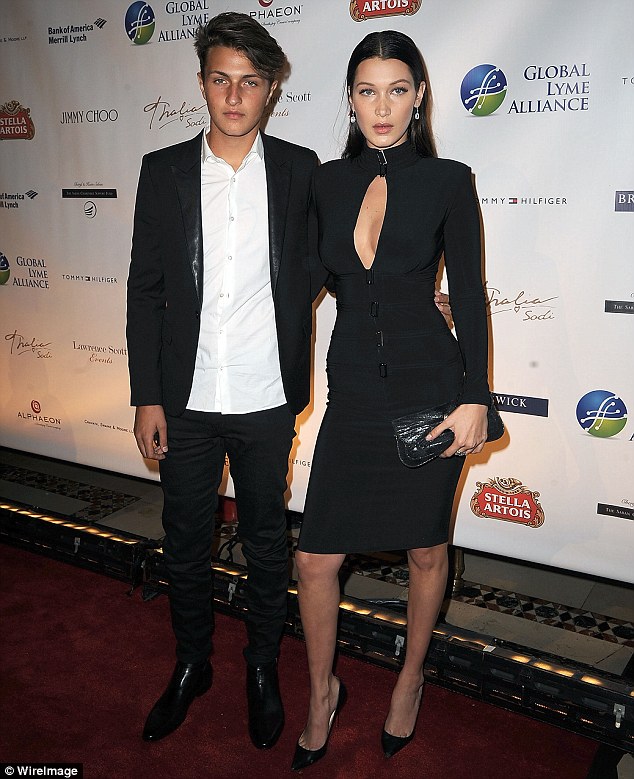 Battle: Anwar and Bella, pictured on Thursday at the Global Lyme Alliance Gala, have been diagnosed with Lyme disease, just like their mother Yolanda 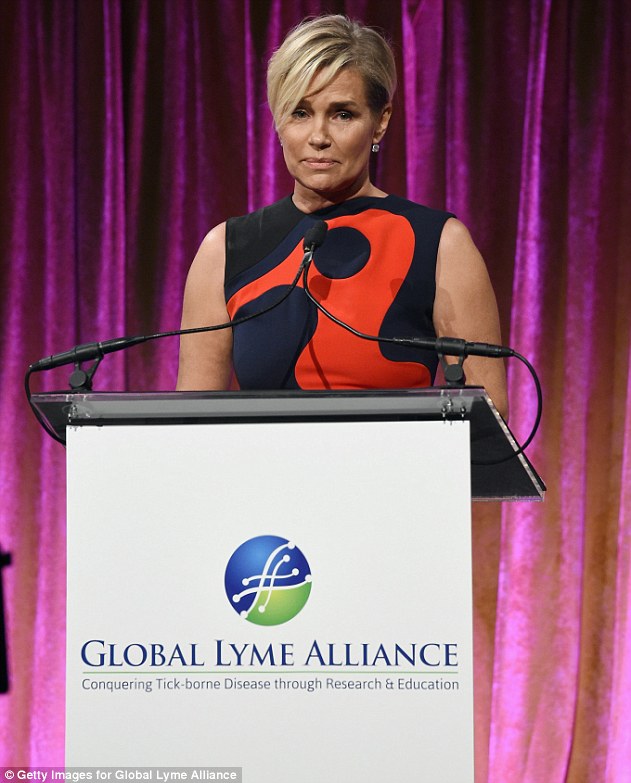 Seeking a cure: Real Housewives Of Beverly Hills star Yolanda was diagnosed with Lyme disease in 2012 and has pledged to find a cure for her children

While Yolanda has not revealed exactly how or when she contracted the disease, in January this year she wrote in a blog post that: ‘I wasted the first year trying to get diagnosed and spent the next two trying to find a cure.’

Caused by bacteria, Lyme disease can often be treated if caught early, but Yolanda is struggling with harsher symptoms because she was not diagnosed for around a year.

If left untreated it can cause severe and long-lasting symptoms including arthritis, meningitis, numbness in the limbs, paralysis of the facial muscles, memory problems and heart failure. Some people even go on to develop long-term symptoms similar to those of fibromyalgia or chronic fatigue syndrome.

Telecom tycoon Caudwell strongly believes that the disease is endemic, arguing that if an entire family like his can be infected, the disease must be both sexually transmitted and passed from mother to child in utero, and – furthermore – that it could be the root cause of multiple other illnesses including ME, Alzheimer’s and multiple sclerosis.

Currently doctors don’t know whether the disease can be transmitted between humans.

In September Caudwell, who is one of the richest men in Britain, announced that his son Rufus, 20, daughters Rebekah, 35, and Rhiannon, 27, and ex-wife Kathryn McFarlane, whom he divorced in 2001, have all tested positive for the disease.

The 62-year-old said: It’s completely devastating. I have no idea how it’s happened to my family.

‘When I heard my son had Lyme disease, it was after nine years of his suffering — with no symptoms that were obviously Lyme disease. It mimics other illnesses.

‘It suggests it could be congenital or transmitted person to person.’ 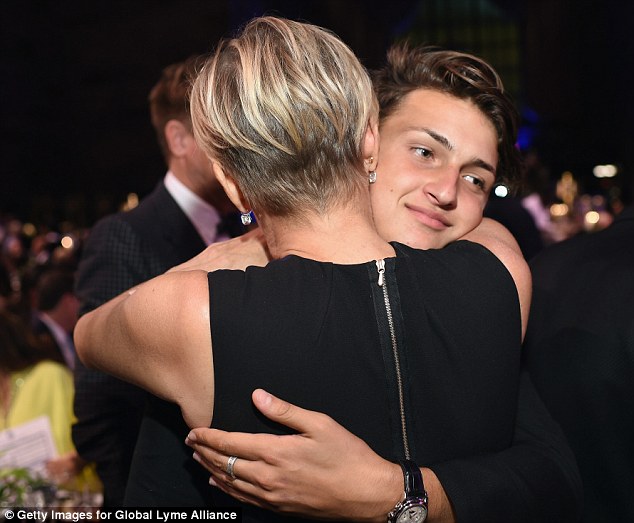 Big hug: Yolanda’s youngest child Anwar, 16, received a big hug from his mother at the gala which proved to be an emotional night for the whole family 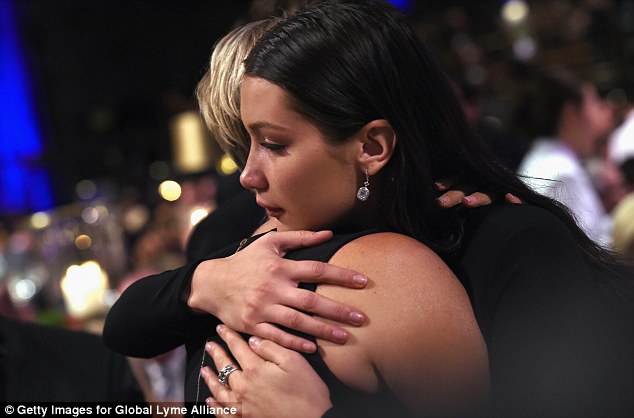 Close connection: Bella, 18, also received a warm embrace from Yolanda as she vowed to continue her fight to find a cure 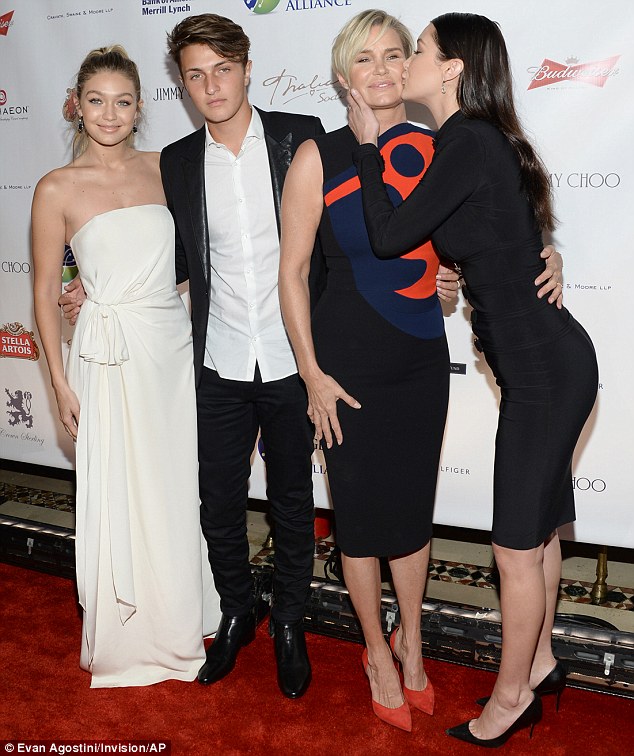 Sad news: Yolanda was honoured at the Global Lyme Alliance Inaugural Gala in New York City on Thursday, where she revealed her children (pictured with eldest daughter Gigi, 20) were battling the disease

There is no evidence that Lyme disease can be transmitted from person-to-person, according to the US Centers for Disease Control and Prevention.

‘A person cannot get infected from touching, kissing, or having sex with a person who has Lyme disease,’ it said.

While no official health bodies warn of the disease being transmitted in utero or through breastfeeding, some doctors, such as Dr Charles Jones, of Lyme Disease.org, believes there are some children who were infected these ways.

Yolanda’s eldest daughter, model Gigi, 20, presented the Real Housewives Of Beverly Hills star with the Power Of One award at the gala in recognition of Yolanda’s battle with Lyme disease and her ongoing fight to raise recognition of the debilitating condition.

Taking to the stage, Yolanda told the audience at Ciprani 42nd Street she was dedicating the award to her youngest two children, Bella, 18 and Anwar, 16 – revealing for the first time that they too had been diagnosed in 2012.

‘This award is for Anwar and Bella.. This is my token and my promise to you that I will not allow you to live a life of pain and suffering,’ she said in an emotional speech.

‘I will walk to the end of the earth to find a cure so that you can live a healthy life that you deserve. No child should suffer the way that you do.

‘I thank you both for your extraordinary selflessness during this journey. Your unwavering love and compassion has kept me alive and fighting through the darkest days of my life,’ Yolanda added.

The Real Housewives Of Beverly Hills star was diagnosed with Lyme disease in 2012.

Watching her family be diagnosed with the disease prompted Yolanda to raise awareness of the condition, while also seeking treatment.

Medical literature states that the disease can be treated with antibiotics, and if particularly severe, a specialist might prescribe antibiotic injections. 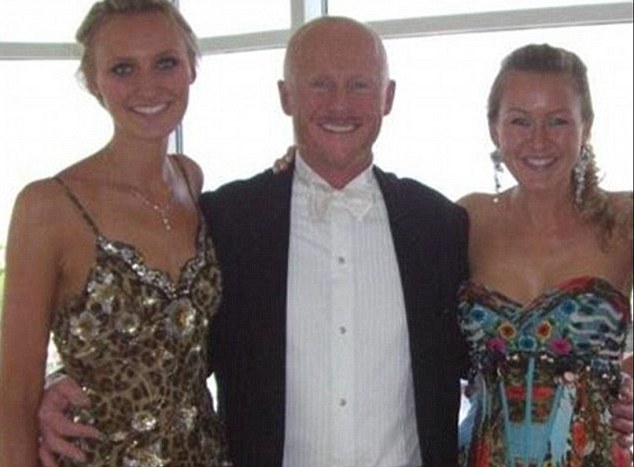 Family illness: Phones 4u founder John Caudwell with his two daughters Rhiannon (right) and Rebecca (left) who all have been diagnosed with Lyme disease. Mr Caudwell believes that the disease is endemic, arguing that if an entire family like his can be infected, the disease must be both sexually transmitted and passed from mother to child 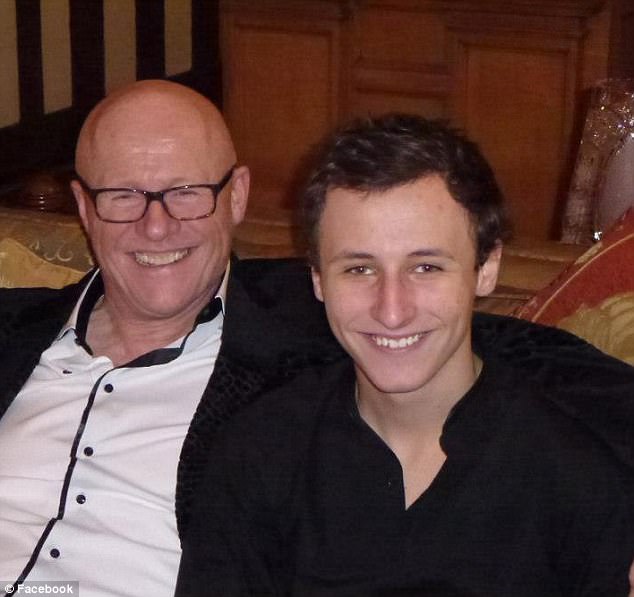 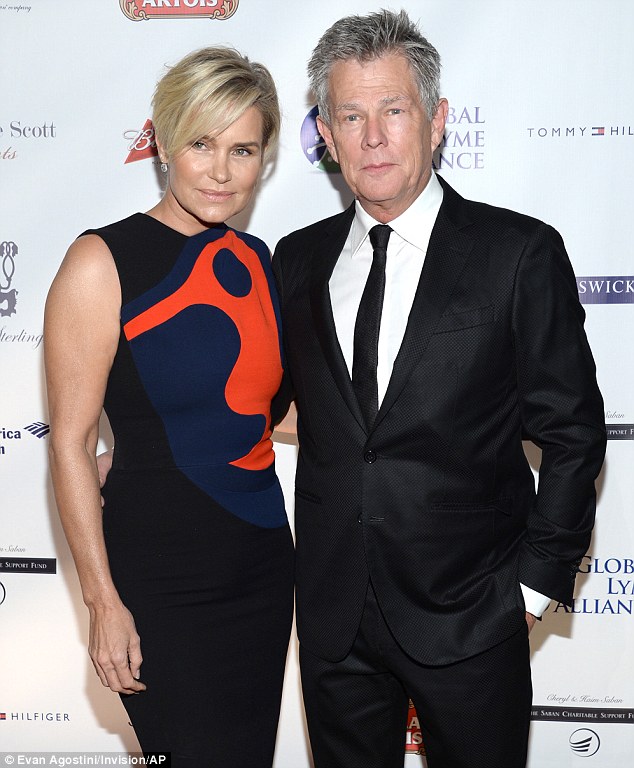 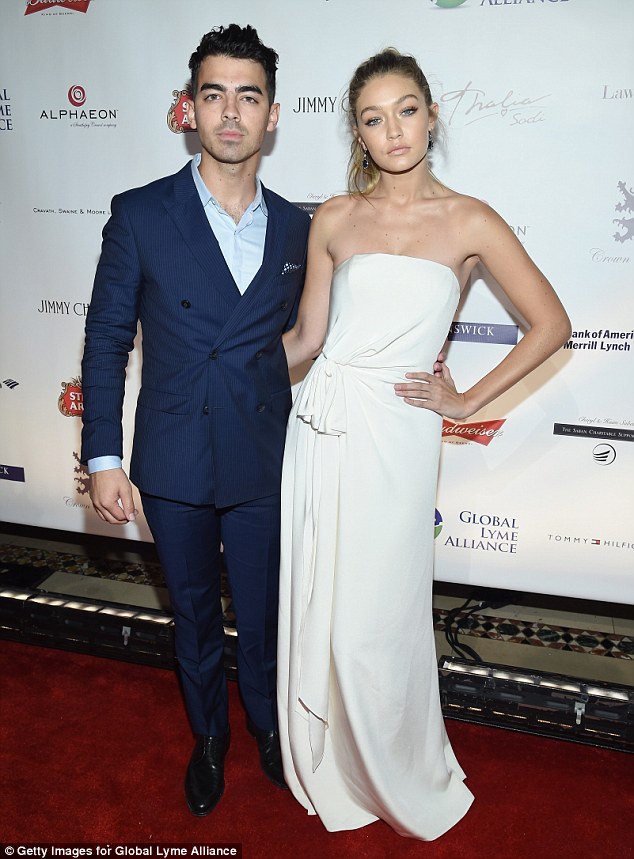 Strike a pose: Gigi attended with her boyfriend of five months Joe Jonas, marking the first time they have walked a red carpet as a couple

Yolanda was joined at the gala held at Cipriani 42nd Street by her husband David Foster and Gigi’s boyfriend of five months, singer Joe Jonas.

Gigi got emotional as she spoke about her family’s struggle with the illness in an interview with Entertainment Tonight on the red carpet, tearing up as she explained:

‘I’m the only one in, of my siblings, my mom and my family that hasn’t been affected by Lyme disease. It’s been really hard for me because I’m the only one that doesn’t really understand it.

‘What’s been hardest for me is just trying to find a way to be their hope and kind of be a strength for them even with the disease that I can’t understand fully because I haven’t been through it,’ Gigi added.

Lyme disease is caused by the bacterium Borrelia burgdorferi and is transmitted to humans through the bite of infected blacklegged ticks, according to the US Centers for Disease Control and Prevention.

Symptoms include fever, fatigue, and a skin rash that sometimes grows to resemble a target. If left untreated the infection can spread to joints, the heart and the central nervous system. 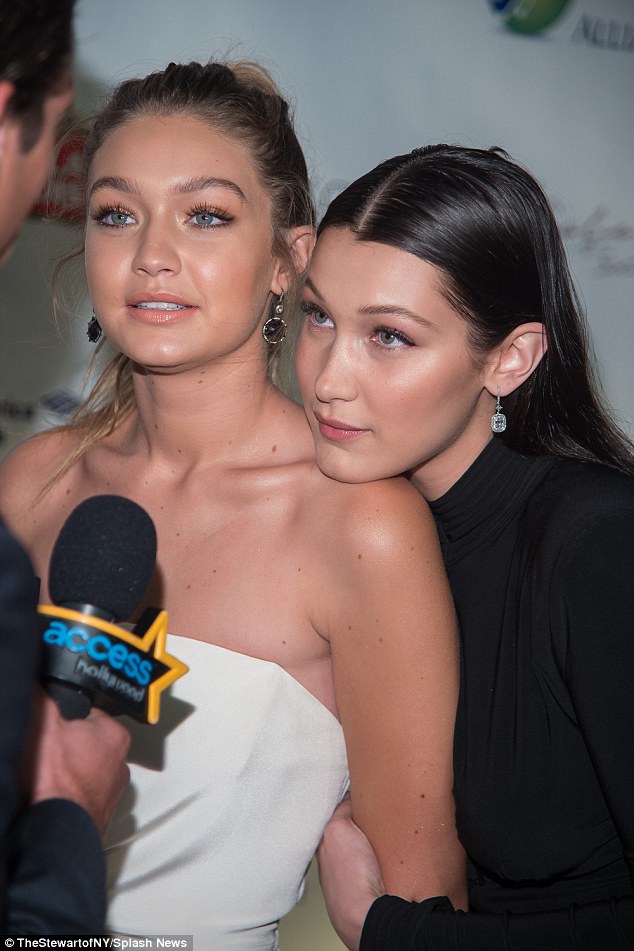 For a good cause: Gigi got emotional as she spoke about her family’s struggle with the illness in an interview on the red carpet with Bella 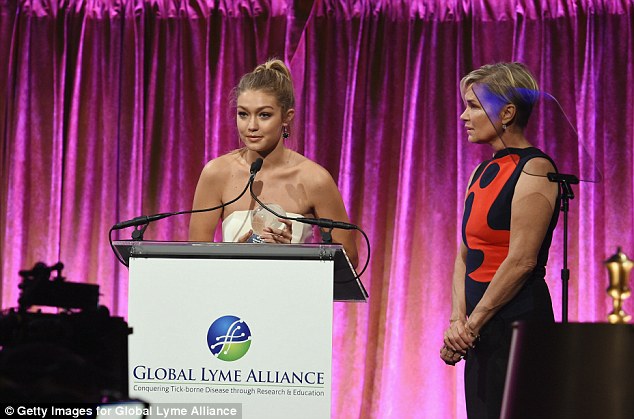 Proud: Gigi presented her mom with the Power Of One award at the event, giving an emotional speech 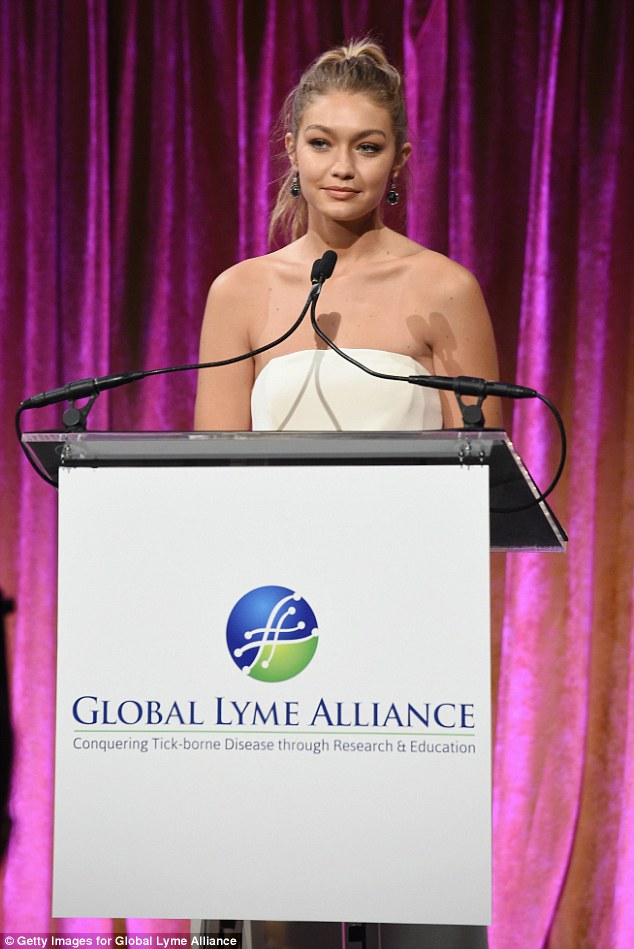 Stage presence: The top model, who along with Bella walked runways during Paris Fashion Week this month, held the audience captive with her gaze 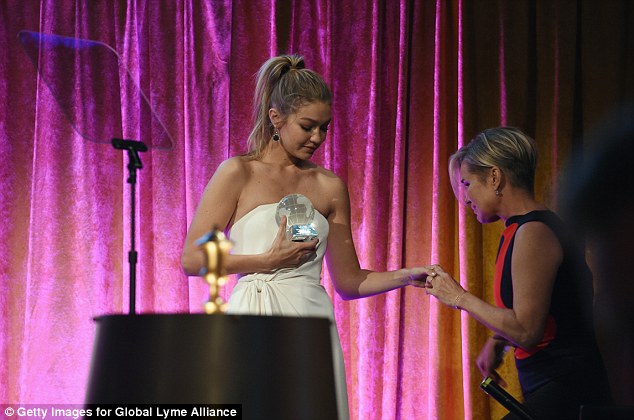 Support: Gigi introduced Yolanda to the stage and helped her up to the podium as the Real Housewives star prepared to deliver her speech 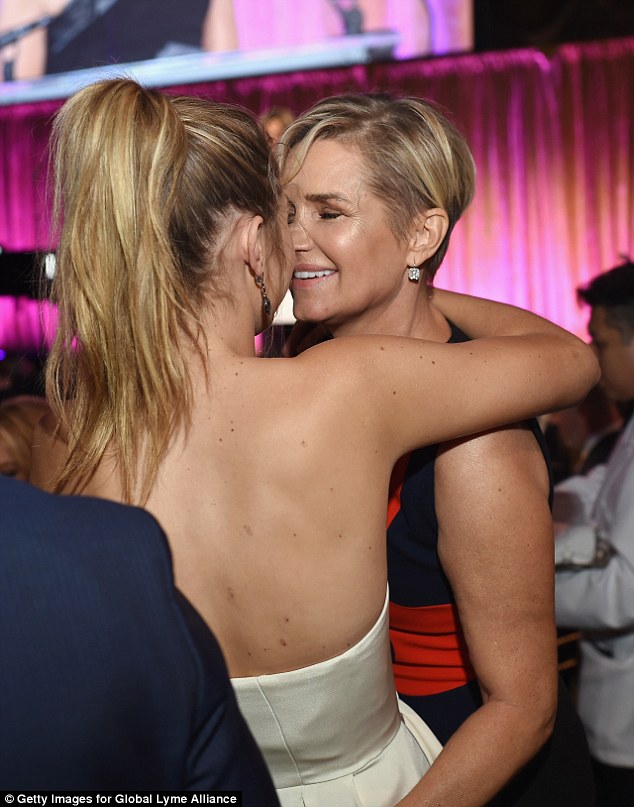 Super close: The mother and daughter shared an emotional embrace after Yolanda’s dedication to her children 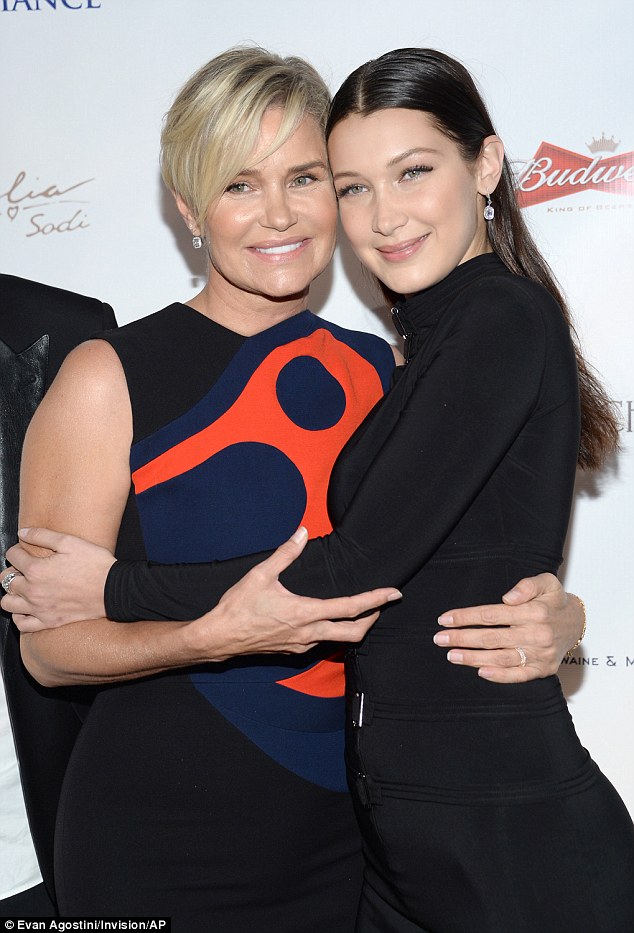 That’s my mom: Taking to the stage, Yolanda told the audience at Ciprani 42nd Street that she was dedicating the award to her youngest two children 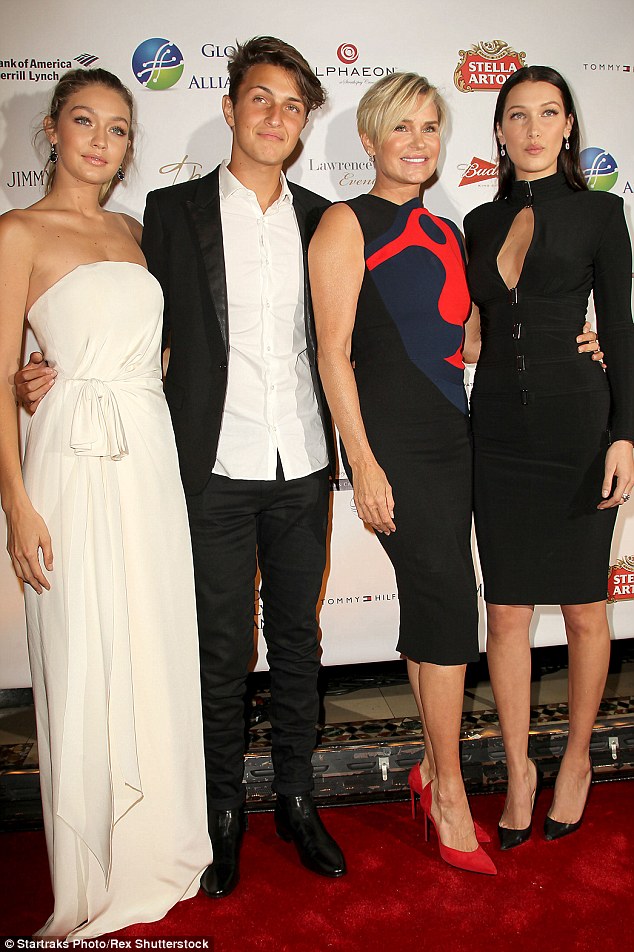 Like mother, like daughters: Both Gigi and Bella are following in Yolanda’s footsteps down the fashion runway – and Bella got to take to the catwalk for Kanye West’s show during NY Fashion Week last month 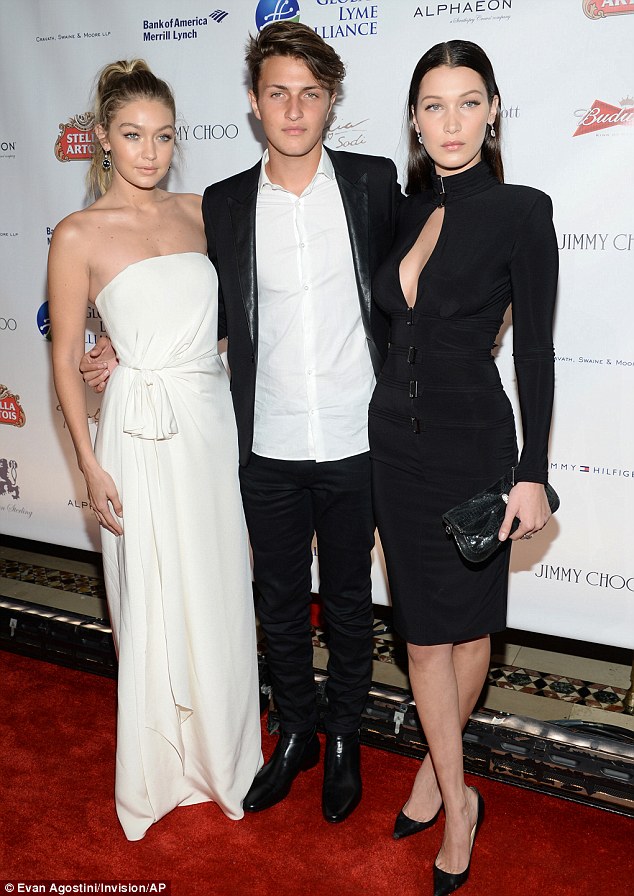 We are family: The Hadid sisters and brother were on hand to support their mom who was a special guest at the event designed to raise awareness to find a cure for Lyme disease 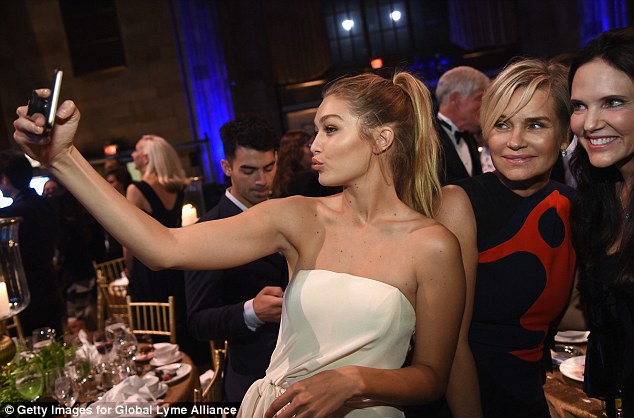 Say cheese: Gigi snapped a selfie with her mother and pals at the event, which celebrated Yolanda as well as raising recognition of Lyme disease

Yolanda earlier this year said the illness had progressed to the point where had ‘lost the ability to read, write, or even watch TV.’

The former international model has been chronicling her efforts to combat Lyme disease on social media. Just last week, Yolanda shared yet another picture of herself continuing treatment.

‘Exhausted but determined to uncover the mystery of chronic Lyme disease…….,’ Yolanda wrote in the caption.

Other snapshots have shown her seeking a variety of treatments around the world in a bid to regain her health.

Other celebrities who have contracted Lyme disease include singer Avril Lavigne, 31, and singer Daryl Hall, 68, of Hall & Oates who was diagnosed with it in 2005. 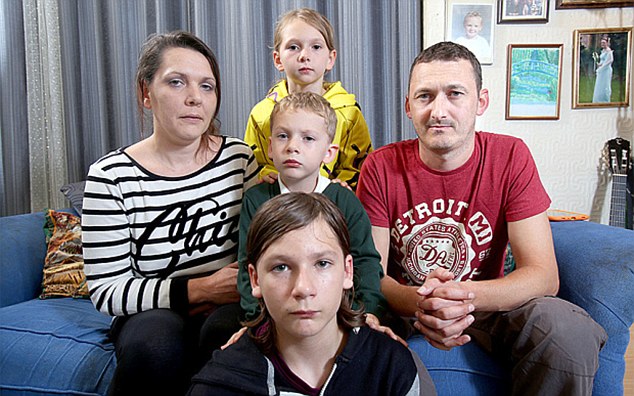 Lyme Disease sufferer Adelle Huckins (left), 35, is convinced that husband Rob (right), 37, and their three young children Josh (front), 12, Kaitlyn (back), 10, and Dexter (centre), 5, have contracted the disease from her. She said that British Phones 4U billionaire John Caudwell is right in his belief that Lyme disease is endemic and that it can be passed through the womb 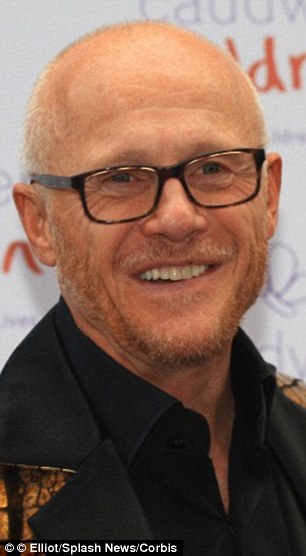 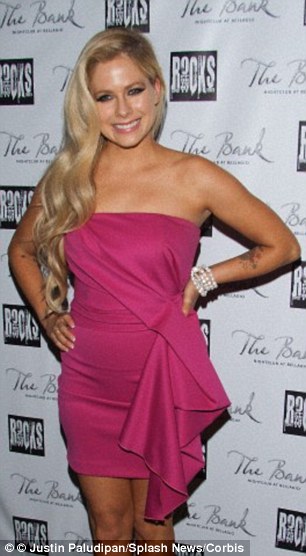 Singer Avril Lavigne, 31, and British Phones 4U billionaire John Caudwell have both announced they have been diagnosed with Lyme disease

Yolanda and David Foster in healthier times back in 2014 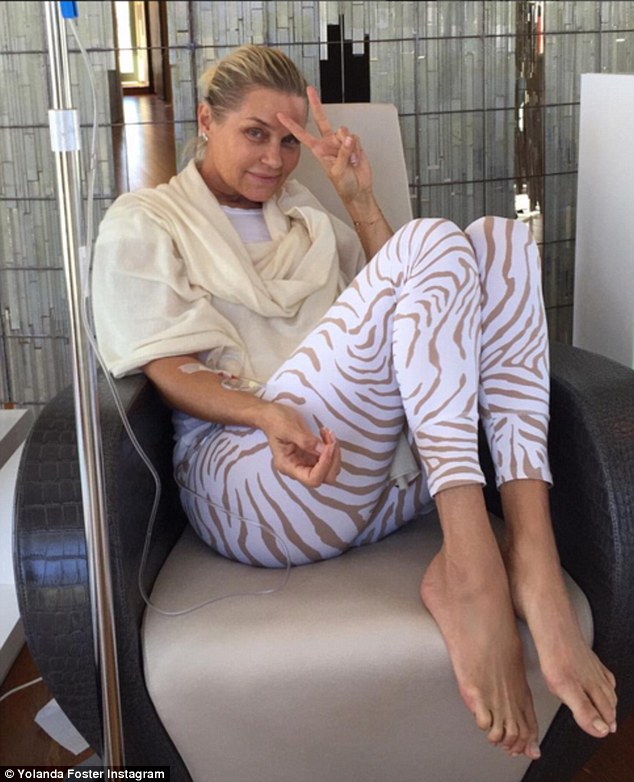 My children pleaded with me not to remarry — Patience Ozokwo