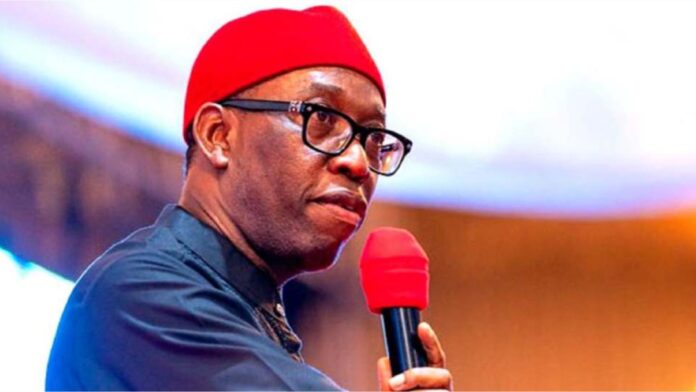 It was a measure of capacity and preparedness for the extraordinary challenges that lie ahead and Governor Ifeanyi Okowa ticked all boxes. Okowa was at the Townhall meeting organized by Arise TV on Sunday night in place of his partner on the Peoples Democratic Party (PDP) presidential ticket, Atiku Abubakar. He admirably convinced Nigerians of his suitability for the presidential office with his exceptional brilliance in canvassing positions and his maturity in pointing out answers to nagging questions.

In unveiling Okowa as his running-mate in June this year, Atiku implied that he wanted “a president-in-waiting” and someone he can depend on in the task of reversing the “destructive impact of the past seven years of the APC government.” The former vice president knows well enough that the task ahead won’t be easy and believed a partner who has what it takes to share in the burden is all he needed.

Okowa proved him right at the town hall meeting. One of the main tasks of a running mate is to present the ticket as the best option available, brilliantly articulating plans that placed it ahead of other tickets. In the beginning, there was a sense of gloom around the hall. Murmurs that Atiku, not Okowa should be standing on the podium to debate other presidential candidates grew into a loud discontent.

Picking up the microphone, the Delta State Governor shredded those concerns with the exceptionality that comes from the incredible solutions to Nigeria’s challenges in the PDP recovery plan document. While many of the speakers only see problems, Okowa shared hopes and optimism– accentuated by the confidence that is expected of a politician who is prepared.

“There are numerous challenges in Nigeria today. We have insecurity. We have the issue of disunity. Until we can unite ourselves as a nation, we cannot move forward,” Okowa said at the meeting, and then went on to project likely ways that the issues can be tackled for the country to progress.

It was a performance that showcased Okowa’s pragmatism in taking on issues and why he will be a helpful hand to Atiku as president, going by the ability to connect solutions to a problem. “Technology is important in combating insecurity– and we will acquire it. We will acquire it for intelligence gathering and sharing,” Okowa aptly submitted.

For the entire time he held the microphone, he made it clear that the focus of him and Atiku is fixing the country and not just trading blame, which in truth is what Nigerians need at a time like this. Even more impressive was how Okowa conveyed the understanding of what an average Nigerian is going through and projected a ray of hope under a PDP federal government.

When the structure of government was up for discussion, Okowa did not waste time expressing the commitment of an Atiku presidency to true federalism, where power is devolved around the federating units. Doing this, he canvassed, will open up the country to a lot of benefits as the ‘too powerful’ center as we have it now, has impeded competitiveness.

By all measures, Okowa showed the balance we have not seen in recent times in a presidential ticket, and without doubt, signaled the huge benefits that Nigeria as a nation could benefit from a partnership with Atiku. He made it very obvious that he can easily fill into the role of president whenever Atiku is not available for that role.

Demonstrating the role he will play in helping Atiku achieve his mandate of fixing Nigeria, Okowa pointedly notes that “The right path is to use government resources to develop entrepreneurs, make people’s lives easier, and grow the economy so that people will live in a better condition.” This goes to show the strength of the partnership and the best for Nigeria at a precarious time like this.