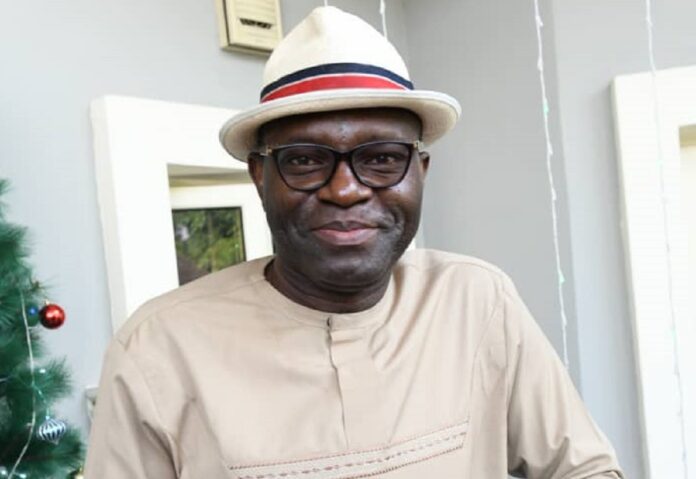 Daniel Alabrah is the Chief Press Secretary to the Governor of Bayelsa State, Senator Douye Diri. Before now, Alabrah was Special Adviser on Public Affairs to the immediate past governor of the state, Seriake Dickson. In June 2012, he was appointed to head the Media and Communication Unit at the Presidential Amnesty Office in Abuja, a position he held till September 8, 2015, when he resigned. In this telephone interview with ISIOMA MADIKE, Alabrah speaks on the various efforts and exploits of his boss as he marked one year in office on February 14.

What would you say is the biggest challenge of your boss, Senator Douye Diri, in the past one year as the governor of Bayelsa State?

It has not been a very easy ride, I must say. Senator Douye Diri came at a time the whole world was gripped by a pandemic that actually distorted plans of national and sub-national governments. COVID-19 was not expected and it spread in such a way that virtually no one was spared its anger and fury. So, for a man that just came into office on February 14, 2020, at a time this pandemic was sweeping across the world, there was bound to be some challenges to contend with. With the coming of COVID-19, the world got used to a new normal, which we all had to adjust to. The new words became lock down, palliatives, and COVID-19 protocols. States and countries were locked down and Nigeria was not an exception. The new government had to start thinking and planning how it was going to survive the effects of the pandemic. That was a challenge.

How was he able to manage the situation?

He was able to manage the situation very well that till date Bayelsa is one of the states with the least number of cases because of the measures that were put in place. Un-like in some other states, Governor Diri did not direct a lockdown of the state in a manner that it amounted to punishment on the people. He ensured that most of the decisions at that time had a human face. For him, people would have to learn and understand the effects of COVID-19 by persuasion and not by force. He understood that this was unexpected and that nobody prepared for it. The pain of COVID-19 is such that you do not make the people suffer double jeopardy. So, largely the situation was well managed and we saw that at the end of the first wave of the pandemic, the situation wasn’t too bad in the state. However, with it came a lot of things that the government had to do.

What are those things that the government had to do?

The government had to distribute palliatives to the people across the state, ensuring that persons whose means of livelihood had been affected needed to be given some support to be able to survive. It also embarked on the distribution of foodstuff and other items four times between April and July of last year. It had to establish a research and diagnostic centre with a standard molecular laboratory for testing infectious diseases just as it embarked on extensive sensitisation campaigns across the state. Now, we are in the second wave, which means the government still has to keep an eye on how to protect the people from the effects of the pandemic.

How was he able to address other issues in the state such as the welfare of the people and infrastructural development?

There was a downturn in the economy of the country, which greatly affected our revenue and monthly allocation from FAAC as an oil producing state. You know there was a drop in the price of oil. So, national revenue was affected. And that by extension meant that the revenue accruing to states, particularly the oil producing states, was affected and Bayelsa was badly hit. But the governor had to prioritise. One of the things he prioritised was the welfare of civil servants, retirees and pensioners. Bayelsa largely is a civil service state. So, when revenue dwindled it affected the projections, particularly with the infrastructure and other areas the govern-ment needed to tackle headlong. With the lockdown, not much could be done at that time. But he decided that regardless of the drop in monthly allocation, our people should not suffer so much. He ensures that salaries of civil servants are paid as and when due. In fact, he directed that by 27th or 28th of every month, civil servants get their salaries.

Looking at how he became the governor of the state, did he see the many court cases against him as a distraction?

Indeed, that was another challenge he had to contend with – the plethora of court cases. It is on record that no governor has faced the kind of legal tussle, legal challenges that this governor has contended with. The pre-election and post-election cases altogether were about 32 and five of them got to the Supreme Court. Instructively, the governor won all of them. Without an iota of doubt, these court cases were a distraction. The purpose was for him to lose focus but he kept his calm. He was focused. Often he had to travel out of the state as those cases required that he kept a close eye on them. The plan of those behind these litigations was to unsettle him. But for a man who miraculously came into office, we were not surprised that the same God that made it possible also ensured that he remained on that seat. A lot of things were done to unseat him. You cannot even imagine the length that some people went just because they wanted to unseat the governor. But as he always says, it is God that gives power. He is the One who is the originator of power and He is the One who ensures that you remain on any seat of power. That God has always been present to decide those cases in his favour.

Entrenching peace and unity among the people of Bayelsa is another daunting task. How was he able to achieve that?

He is committed even as he believes strongly in the unity of the state. He believes in the unity of the Ijaw nation. He believes that Bayelsa as the only homogeneous Ijaw state, as the home of all Ijaw people, is a place that we should allow peace to reign. It is a place that we must protect our people with everything we have. So, he has ensured that areas where there was hitherto no peace, where there were conflicts and open disagreements, he intervened in such a way that the people believed that there could be reconciliation. I will give you an example. On November 13, three days before the November 16 governorship election in 2019, supporters of the People’s Democratic Party (PDP) and people who had gone to Nembe to campaign with and for Senator Diri and his then running mate, Senator Lawrence Ewhrudjakpo, were attacked. Persons were reportedly killed and several persons were injured in that attack. But beyond the attack on these persons that visited Nembe three days before the election to campaign, there was already an existing disagreement within the same Nembe-Basambiri and Ogbolomabiri-Nembe community. They were divided politically and supporters of the PDP became targets of attack.

How did he know they were targets of attacks?

Some chieftains of the party had to flee from Basambiri and became IDPs in their own state. But, as we speak, that situation has been resolved. The governor has been able to ensure that peace returned. Not peace of the graveyard but real peace has returned to Nembe. The IDPs have now returned to their ancestral home. Brothers that were previously at daggers drawn have reconciled. There is a unity bridge linking the two parts of Nembe. Today, the contract for that bridge that was destroyed has been awarded for it to be fixed. This is because the governor is somebody who loves peace, unity and togetherness. His positive disposition resonates well round the whole state that anywhere there is conflict, the government steps in and they are reconciled. So, the governor has been able to reduce tension and friction in the state to a large extent. Now people in hitherto crisisridden communities are beginning to enjoy the benefit of peace.

In the last one year, what giant strides has the government made in the education sector?

Without trying to make any excuse, you will agree with me that generally a lot of things didn’t take off immediately because of COVID- 19. But I want to say that there are challenges we have identified in the education sector that we really have to correct. There has also been some form of infrastructure decay in the sector over the period and this is being addressed. Contracts for the renovation of schools, particularly primary and secondary schools have been awarded. Physical infrastructure is important in the education sector. But, generally as a state, Bayelsa is one that has done very well in terms of its performance in national examinations. And the previous government of Senator Dickson did very well in changing the educational narrative of the state. When he (Dickson) took over in 2012, Bayelsa’s position in national examinations was not good. At that time, we were around 29th or 30th position among the 36 states. But by the time he left office in 2020, this had significantly changed. Today, Bayelsa is among the first seven states when you talk about performance in national examinations. This current administration is committed to sustaining that record and even improving on it.

How was that feat achieved?

I want to say that this change in the educational performance of Bayelsa was not by happenstance. It was not by mistake. It was because of deliberate and conscious policies put in place to ensure that the state does well or for Bayelsans to do well in these national examinations. Let me also recall that in terms of infrastructure, the previous government built model schools across the eight local government areas. These model schools are a delight to see. For instance, the Ijaw National Academy in Kaiama is a school that was consciously built and developed in such a way that you cannot but admire what is in place. The Dickson administration did very well in conceptualising and developing the model schools system, which are all boarding schools and tuition-free. There is however a need to replicate that across the state. For a state that is young and developing, some of these things cannot be automatic. It will take some time before we would get every school to be on that level. Even in older states, you still have schools with dilapidated infrastructure. It is not peculiar to Bayelsa, but we believe that it can still be better.

What about the agricultural sector?

From the outset, Diri’s administration prioritised agriculture. That sector has had the second largest share or allocation in the budget of the last two years. It means we want to be able to feed our people and be able to derive the economic benefit from agriculture. So far, the government has been able to support farmers in the state by guaranteeing the CBN facilities for farmers. In addition to that, the government has also taken a N10 billion CBN facility, which is a credit window the Federal Government opened for states in Nigeria to cushion the effects of the COVID-19 pandemic. That facility would be disbursed and supervised by the CBN. That money is not coming directly to the gov-ernment’s coffers. It is not a loan from any commercial bank.

Evil father: How my husband killed our son to make money — Wife

The Man, Gamaliel Onosode, unveiled to the Public At Book Launch In Lagos