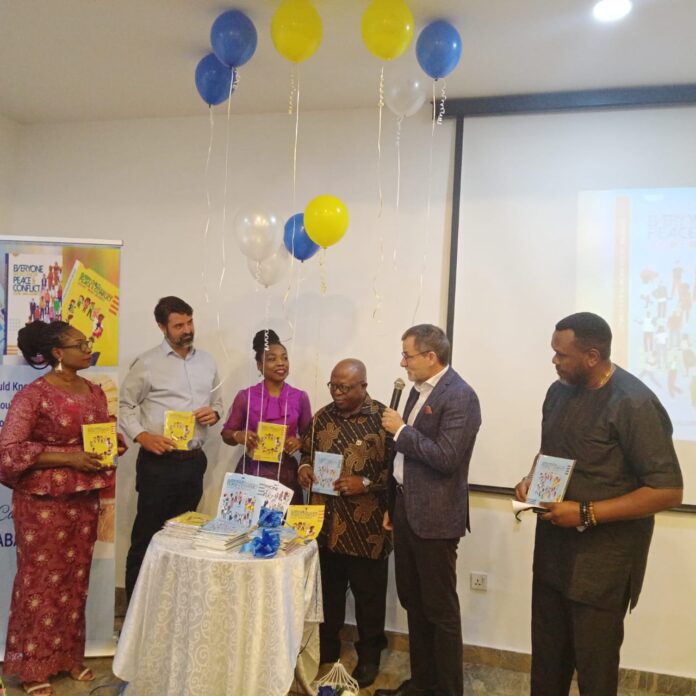 An Author, Miss Uduak Abasi-Akpabio, has called for the building of peace capacity among children and youth towards resolving conflicts and providing meaningful coexistence among Nigerians.

Abasi-Akpabio, who said this in Abuja at the launch and presentation of her book titled: ‘Everyone Should Know Peace and Conflict: Building Capacity for Peace”, said that peace brings together the various tools for resolving conflicts.

While speaking on the relevance of the book to the society, she said it provides a toolkit made up of skills and tools to apply to build the capacity for peace and conflict resolution.

According to her, it is important to start at an early age to build capacity and equip children on issues of peace and conflict.

“In the content of Nigeria, while putting down fire and addressing violent conflicts, it is importance to start early to build capacity among children, among youths, among citizens for peaceful engagements.

“This will help to address conflicts in a way that facilitate meaningful co-existence and growth in our country,” she said.

Abasi-Akpabio also said there was need to take a look at the security engagement in the northeast and build capacity for peace for collective resolution of the conflicts in the region.

She also advocated the inclusion of peace materials into the school curriculum at all levels so that peace could be enshrined in children at the early stage of their lives.

“It is important to build capacity in as much as we are doing peace building and conflict management work.

“We are having security engagement in the north east and all that we need to take is a pause and build capacity for peace, if not, in the next 20 to 30years we will still be saying the same story and the same scenario.

” In the same vein, we have children in all schools, so peace education whether formal or informal should be integrated into the school.

” I am hoping that this book will provide the resource and the tools we need for the children, for the youths and the everyday man indeed to be able to address conflicts and live peacefully,” she said.

Also, the Country Director, International Rescue Committee, Mr Babatunde Ojei, commended the author for the book, saying that peace and conflict resolution are the only way to address conflicts.

Ojei said that understanding conflict would make one appreciate peace the more and be able to apply it in all that one does.

“When you look at a lot of the conflicts around the world, it starts from somebody not wanting something and not agreeing to have a table where they can discuss or find a solution.

” So this is a book that I will refer to as a solution-finding book. It is relevant to the ongoing situation across the world and in our country in particular,” he said.

In the same vein, Prof. Wole Soyinka commended the author’s contribution while calling for our collective responsibility to guide the minds of the future generation.

Soyinka, who was represented by the Head of International Corporation/Resource Mobilisation for GivFree Africa, Mrs Chioma Tamunobubelebara, said there was need for peace to address the present challenges in the country.

“These are dire times for the nation, and every right-minded citizen is surely preoccupied with possible solutions for an unprecedented level, and multiplicity of zones of conflict.
“We should welcome all efforts to set down reflections on what is no less than a crisis of humanity.
” Attention to the place of children in conflict resolution is especially encouraging. “Catch them young” being a sound principle of nation building,” he said.
Also, the Former Ambassador to Kenya, Chijioke Wigwe, said it was important to catch the children young before they are exposed and influenced by the vagaries of life.

”There is no better time to reflect on the subject of peace and conflict resolution than now when every part of West Africa and our dear country is inflicted with the twin scourge of conflict and insecurity.

”Frantic as efforts by governments, regional and international organisations to settle conflicts and plant peace in the world have failed largely because of a narrow definition of the terms peace and conflict and the goal of peacemaking.
“All too often focus is on the peripheral aspects of conflict thus when these are mitigated, conflict persists,” he said.