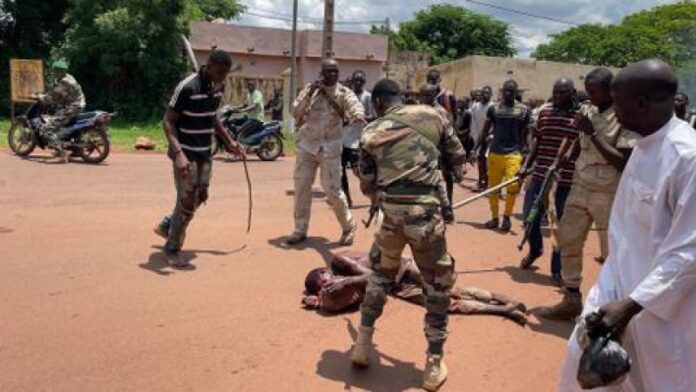 …25 other soldiers wounded, five of them seriously

There was Bloodbath yesterday in Sokolo, with 54 casualties – six of them soldiers – recorded as terrorists went on rampage in the area.

However, the bloodbath was not limited to Sokolo in the region of Segou in south-central Mali, as at least 66 people were killed in terrorist attacks in several towns in the West African country, according to security sources quoted by Anadolu news agency.

“The Malian Armed Forces (FAMa) repelled terrorist attacks targeting positions in Savare, Sokolo and Kalumba early this Wednesday, July 27. The response, carried out with energy and professionalism, has enabled the attackers to be routed and pursued,” Colonel Souleymane Dembele, the army’s director of information and public relations, said in a statement.

Anadolu said in a dispatch this morning that “a report on the fighting showed 54 dead, including six soldiers, and 25 soldiers wounded, including five seriously, in Sokolo in the region of Segou in south-central Mali, where a coordinated response was orchestrated against the attackers, who were routed.”

The same source also reported 12 dead “on the friendly side,” including three civilians from a road construction company, following a “vigorously repelled” terrorist attack in Kalumba in the Nara region near the Mauritanian border, the report said.

The sweep and assessment of the attack is still ongoing, according to the military authorities.

“The aerial pursuit made it possible to attack terrorist logistical bases under cover of vegetation in the vicinity, thus reducing the enemy’s potential,” Dembele added.

Continuing, the report said: “On the central Mopti side, infiltration attempts targeted one of the checkpoints of a military camp as well as air force installations without success as suspicious movements were contained by FAMa.

“The attacks are part of a series that have targeted Malian army posts recently.

“On July 21, three soldiers and three terrorists were killed in simultaneous complex attacks in several locations.

“The following day, one soldier and seven terrorists were killed in a car bomb attack on the facility of the Directorate of Material, Hydrocarbons and Transport of the Armed Forces (DMHTA) in Kati near the capital Bamako.

“The attacks confirm the signals and clues previously detected and identified by the competent services and materialize the agony of the armed terrorist groups in Mali, according to military staff.”

Anadolu quoted Dembele as saying: “These armed groups are actually demonstrating their overall weakening by carrying out desperate actions of kamikaze attacks, actions on civilians, and the planting of improvised explosive devices.”

The military communication from the West African country, one of the most plagued by terrorist attacks in the Sahel for years, does not name the attacking terrorist group.

One of the intelligence reports proves that one of the attackers is based in a neighboring country, according to the military body, which intends to “determine the connections and possible complicities” after investigations.

BREAKING: Akpabio Dragged To Court Over Failure To Pay For Rented Crowd