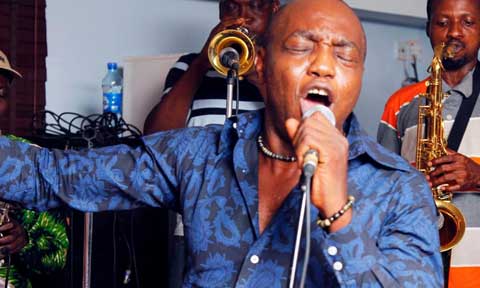 …Says the politicains are the hoodlums

Quintessential Musician, Saxophonist and Actor, Dede Mabiaku, simply referred to as Dede, has dedicated his new single, “Hooligans and Hoodlums”, to the Nigerian Youths, who organized successfully the protest, #EndSARS that took the political ruling class by surprise and shook their foundation.

The lyrics of the song poopoos the establishment for referring to youths legitimately protesting against unbearable conditions of existence, oppression and police brutality as hoodlums. Rather, it sees the politicians who gave the instructions to shoot unarmed citizens and the soldiers shooting at unarmed citizens as the hoodlums.

In an interview with the Publisher of Crossfire Reports, Dede speaks on how he came about the song, Hooligans and Hoodlums.

Crossfire Report: Tell me about the song HooligansandHoodlums. I heard a Sir Victor Uwaifo Sampling in the Sax. Is the song dedicated to the #Endsars victims/situation?

Dede: Manigiets, the song is more or less an expression from me about what I received when the government stated that the #EndSARS people were hoodlums and hooligans.

I said Ah Ah, how come? No, it doesn’t make any sense, when we all saw everything that happened there (Lekki Tole Gate) and they claimed that nobody died and so on and so forth.

So that’s basically where the song sprang up from, that’s why it’s called “Hoodlums and Hooligans”. It’s an esposè as regards what’s going on within the system right now! Cheers.

Dede, a friend of Fela and an Afro Beat icon is one of Nigeria’s most defiant musicians that combines good melodious afro beat sounds with political commentary on the situation Nigeria has found itself through the excesses of undemocratic regimes since the Abami Eda, Fela Anikulapo Kuti left the stage.

Nigerians believe very earnestly in the ideals of the #EndSARS protests and look forward to a similar, bigger, wider protest to send a message to those at the commanding heights of bad governance in Nigeria.

A Lagos State Government Judicial Commission of Inquiry recently made public it’s report in which it claimed that, 9 people were killed at the Lekki Toll gate, a claim many pro government observers including the government’s Minister of Information, Lai Mohammad had been denying before the report was made public.

Dede is about good music, good life and Power to the People. Dede de oooo.