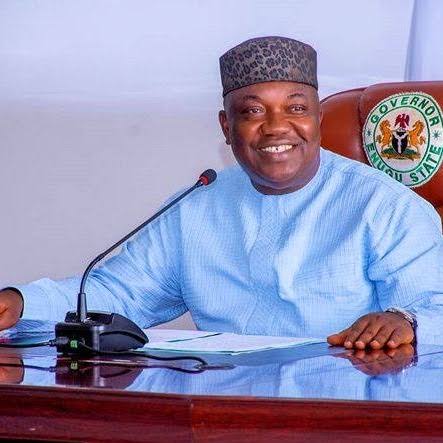 …dismisses  it as a fabricated lie  from the  pit of hell

By Jeff Ejiofor from Enugu

The Executive Governor of Enugu State, Rt. Hon. Dr. Ifeanyi Lawrence Ugwuanyi has called on the general public to disregard an online publication alleging that he called President Buhari in the wake of Uzo-Uwani herdsmen attack and was kept waiting on the phone for hours. In a live video, he described the allegation as an unfounded fabricated lie from the pit of hell by those who wish his administration evil. He further averred that at no time did he make any such call to the President or anybody in the presidency for that matter, as there was no need for that having visited Mr President physically at the heat of the crisis. He also wondered what the peddlers of this dastard rumour intends to achieve by such falsehood at a time every hand should be on deck to arrest the monstrous insecurity situation across the country.

From the above submission of Governor Ugwuanyi, the Doyen of Peace and a forthright servant leader of our time, it appears there is a delibrate attempt by his detractors to run his government down at all cost. Since inception of his administration, efforts have been consistently deployed to wage psychological campaign of calumny against him by those who felt he was becoming too poppular and politically prosperous for their liking. It is a clear fact that before his election in 2015 as Governor of Enugu State, he was the most widely accepted Gubernatorial candidate in the whole of Nigeria, a situation that attracted envy from political pygmies.

Although he has ensured unprecedented political peace in Enugu State by uniting the state, these enemies of progress would not allow him to concentrate, they have continued to distract him with all sorts of unwholly campaign of calumny. However, in his usual skilful manner, he has responded by disarming them with high level maturity and relationship savvy in the words of Reuben Onyishi, an acclaimed social critic and prolific writer.

Ugwuanyi has remained strongly resolute and committed to the peace of the state and good governance. Unlike many state chief executives who would go after their detractors and hunt them down, he has adopted a different approach, all carrot approach. As a principality of peace in the words of Chidi Justice, Ugwuanyi has continued to navigate out of bompy troubled waters to the Glory of God.

Finally, they have failed again in their attempt to tarnish the image of a good man. What they intended to achieve with this latest infamy is inexplicable. They have obviously run out of ideas as the giant strides of the Governor have confused them beyond imagination. The open clarification by the White Lion, Rt. Hon. Dr. Ifeanyi Ugwuanyi has left them gasping for air. Thank you His Excellency, nobody can successfully lie against a living legend.