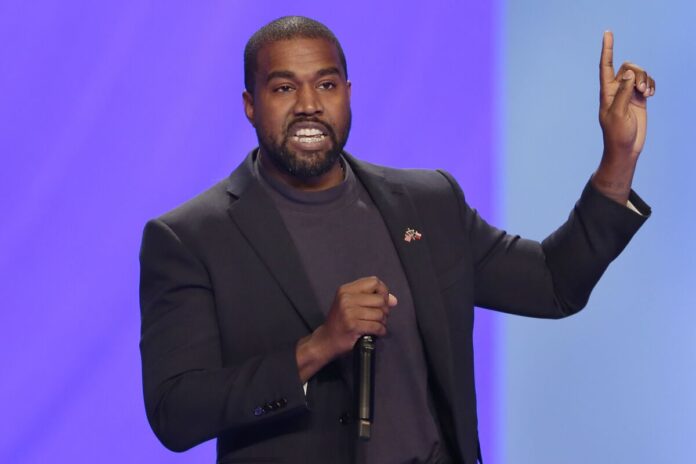 The rapper was locked out of his Instagram and Twitter account for weeks after he posted antisemitic messages on each platform.
By Johanna Chisholm
Kanye West’s Twitter account appeared to be reactivated after weeks of the rapper’s access being locked after he broke with the terms of service by posting antisemitic messages.
The news arrives just hours after Elon Musk successfully took over the social media platform for $44bn, a move that many speculated would lead to previously blocked accounts becoming unlocked by the self-described free speech absolutist.
The 45-year-old also saw Instagram reverse the ban on his account, his preferred platform for posting, late Wednesday night. He’s lost access to posting on each platform earlier this month for sharing separate antisemitic posts that broke with each company’s terms of service.

In his first posts shared on Instagram, the Donda artist appeared to address the recent fallout with Adidas and Gap, two of the larger commercial partners who have terminated their business relationship with him in recent weeks.

Iranian youth are leading a revolution against 44 years of dictatorship. The world needs to support them and honor their courage.

One of the posts, the rapper shared a purported screenshot of a text conversation with “Quinn Emmanuel,” likely referring to the attorneys from Quinn Emanuel and Stradley Ronon who have previously worked for West on his partnership with Gap.
“As to adidas, you can start to make new designs for footwear, apparel and accessories immediately,” the text read. “As to Gap, the non-compete expires December, 15 2022.”
The text exchange also mentioned the Yeezy empire. The supposed attorney in the text exchange seemed to confirm that West, who legally changed his name to Ye, maintains ownership over the brand.
“You own the Yeezy name and all trademarks associated with Yeezy,” the text concluded.
The two posts, one of which was deleted shortly after it was shared, seemed to be the rapper’s first public comment on the end of his business relationship with Adidas.
The German sportswear company this week joined a mass exodus of companies and fashion labels that have publicly broken business arrangements and partnerships with the controversy-courting rapper, which now includes Balenciaga, Gap, Foot Locker and Def Jam.
The rapper had yet to post any messages to his recently unlocked Twitter account as of Friday morning, but many online fans of the rapper and free speech supporters quickly took to celebrating the news that he was now able to post.
“KANYE WEST TWITTER ACCOUNT REINSTATED,” tweeted one user, while sharing a celebratory meme.
Others online were not as thrilled about the reinstatement and were quick to remind audiences of the offending tweets that got the West locked out of his account in the first place.
“Anti-semite Kanye West’s twitter account restored after pro-authoritarian @elonmusk takes over twitter. West used the platform to threaten “death con [sic] 3 on Jewish people,’” tweeted Kaivan Shroff, while another punned on the MAGA retort by tweeting: “is Twitter‘s new motto “making antisemitism great again?”
West originally got booted from his Twitter account earlier this month for sharing a tweet that declared he was going to go “death con 3” on Jewish people and alleged that he wasn’t “Anti Semitic because black people are actually Jew.”
That message, posted on Saturday 8 October, was later deleted by Twitter and replaced with text that said it violated the Twitter Rules, linking back to the company’s platform use guidelines.
Twitter’s lockout came on the heels of the rapper’s Instagram deactivation, which had occurred just 24 hours before he’d posted the offending tweets that eventually prevented him from posting on either platform.
On Instagram, West had shared a screenshot of a purported text conversation with Sean “Diddy” Combs where he suggested that his friend was being controlled by Jewish people.
That post, like the messages shared on Twitter, was similarly taken down by Meta. A spokesperson for the social media conglomerate said during that incident that Instagram had deleted posts from West’s page and restricted his account, although they didn’t specify which specific posts broke their rules.
Credit: THE INDEPENDENT.