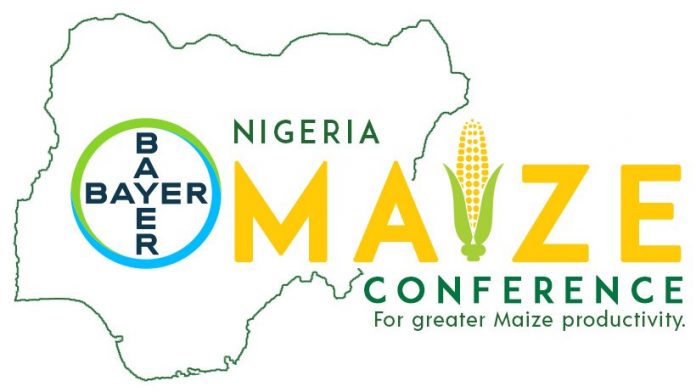 Bayer Nigeria Limited, a subsidiary of Bayer AG, Germany, has been applauded by the Maize Association of Nigeria (MAAN) for its efforts to increase productivity in the Maize sub-sector through its “Much More Maize” toolkit targeted at increasing maize yield for farmers across the country.

The commendation came from the President, the Maize Association of Nigeria (MAAN), Alhaji Bello Abubakar during the just concluded 3rd edition of the Nigeria Maize Conference which was held virtually in Abuja on the 22nd of April 2021.

In his presentation, Abubakar outlined the challenges facing the industry and the efforts of the MAAN to tackle and overcome these challenges. He stated that maize production declined in 2020 from 12.6 million tons produced in 2019 to 12.4 million tons representing a 1.555% reduction due to rainfall deficit and low-level cultivation of improved and drought tolerant maize varieties.

He said the challenges facing maize productivity and the inadequate supply of certified seeds in Nigeria acted as a catalyst that spurred the birth of the Nigeria Maize Conference by Bayer Nigeria. Abubakar highlighted some MAAN achievements including the facilitation of access to mechanization, capacity building of its members on good agronomic practises and the empowerment of more than one million farmers through the CBN Anchor Borrowers programme.

On how maize productivity could be increased through good agronomic practises, the Market Development Regional Manager, Bayer Crop Science in Sub-Saharan Africa, Mr. David Wangila introduced Bayer’s integrated maize portfolio and hybrid seeds as solutions. He said the hybrid seeds had the yield potential of up to 10.9 tons per hectare and were also tolerant to striga, leaf diseases, Maize Lethal Necrosis (MLN) and the maize streak virus.

, the Agronomic Operations Manager (East, West and Central Africa) Field Solutions for Bayer said whilst their seeds were tolerant to some of these viruses, it was also important to ensure proper seed treatment to protect the potential of valuable seeds. He specified how seed treatment could target some relevant pests and highlighted the importance of managing insect pests before they destroyed the maize yields and weed control to ensure the weeds were not competing with the maize crop for scarce resources.

Mr. Kibaki stated that with proper implementation of the Much More Maize portfolio and good agronomic practises, farmers could see results in as little as four weeks with appreciable growth of their maize crops along with an increase in profitability.

The Director General of the National Agricultural Seed Council (NASC), Dr. Olusegun Ojo also emphasized the importance of seeds in the Agricultural revolution of a nation. He stated that the development, production, and dissemination of Quality Seeds of Maize amongst others is central to providing adequate response to the many growing threats to food production from Climate change, increasing drought, pest and decreasing gains in productivity.

Dr. Ojo stated that “the growth of this sector would be hampered without a proper structured seed system to support the industry.” He hailed Bayer’s theme for this year’s edition of the Nigeria Maize Conference which was tagged “Much More Maize”, adding that “Much More Maize” was needed to feed the needs of the increasing global population.

In his closing remarks, the Country Sales Manager, Bayer Nigeria Limited., Mr. Tope Banjo thanked the participants at the conference and expressed his hope that through good agronomic practises and proper usage of the Bayer Much More Maize toolkit, farmers across Nigeria would be able to increase their crop yield which in turn would translate to greater profitability and put Nigeria on the right path towards increasing food supply.