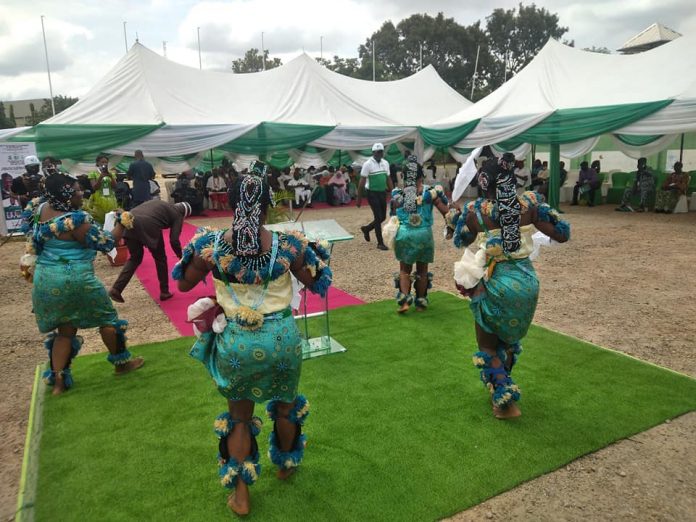 The Nigeria at 60 ALGON Exhibition, Trade Fair and Lecture opened in Abuja today, Monday 27th of September, 2021. The event which is organized by the Office of the Secretary to the Government of the Federation (SGF), the Inter-Ministerial Committee on Nigeria at 60/The Ownership Sub-Committee in collaboration with the Association of Local Governments of Nigeria (ALGON), was put together by a foremost event management company in Nigeria, Redsapphire Nigeria Limited.

In his welcome address, the Honourable Minister of Industry, Trade and Investment, Otumba Adeyemi Adebayo, said the event demonstrated and complemented the efforts of the federal government’s focus on promoting and strengthening economic development at the grass roots level and the overall development of the country at large.

The Honourable Minister said, “the event is a step in the right direction which will serve as a vehicle for the Local Governments to embrace towards generating increased and purposeful economic activity in the short and long run. The event will not only create a platform for sensitization and awareness but it will also provide a means of repositioning the LGAs towards having a better mind – set of fostering economic development of its citizenry”

The Minister further stated that, “the Local Governments are better positioned to tackle the issues facing the local communities and harnessing the available resources to stimulate and sustain economic activities that will lead to employment and income generation, poverty reduction and thus reduce youth restiveness and insecurity in the respective communities”.

Otumba Adebayo, the Honourable Minister of Industry, Trade and Investment said that, the capacity of local governments in generating revenue has declined over the years and that there was thus, a need to for the LGAs to formulate strategies that will improve their revenue base.

In his words, the Minister said, “I strongly urge the Local Governments to explore the immense opportunities from the Federal Government Policies and Programmes that seek to benefit the people at grassroots, offered through various Ministries, Departments and Agencies (MDAs). It is quite enthusiastic to note that the Federal Government has so many programmes aimed at the rural communities such as the Nigeria Agri-business and Agro – industry Development Initiative (NAADI) programme; Capacity development of MSMEs to enable them explore the opportunity provided by AfCTA;  Capacity building of SMEs offered by the Small and Medium Enterprises Development Agency of Nigeria (SMEDAN) and Skills Empowerment Programmes by the Industrial Training Fund (ITF) done across the States of the Federation; implementation of the Global GAP across  the six geo-political zones of the Country which targets key exportable commodities of interest in each zone; creation of Industrial clusters and SME Parks in different States of the Federation”

Consequently, the Minister, urged the Local Governments participants to key in and benefit from any available opportunity and also take drastic steps in promoting the development of agricultural value chains that will produce goods for exports, attract investments and stimulate economic growth. The minister was represented by the Director of Public Affairs and Bi-Lateral Division in the ministry, Lakunle Fashina.

In his own remarks as the special guest of honour at the opening ceremony of the Ownership Sub Committee of the Exhibition and Trade Fair to commemorate Nigeria’s 60th Independence anniversary, the Secretary to the Government of the federation, Boss Mustafa said he was, “particularly impressed with the theme of the ALGON Trade Fair and Exhibition, “Nigeria’s Third Tier of Governance as the Stimulant for Cohesion, Unity, Economic Growth and Development” which resonates with the theme of Nigeria’s 60th Independence Anniversary – Together. The theme underscores the role of the Local Governments of Nigeria as the third tier of government in promoting unity and cohesion in the country”. 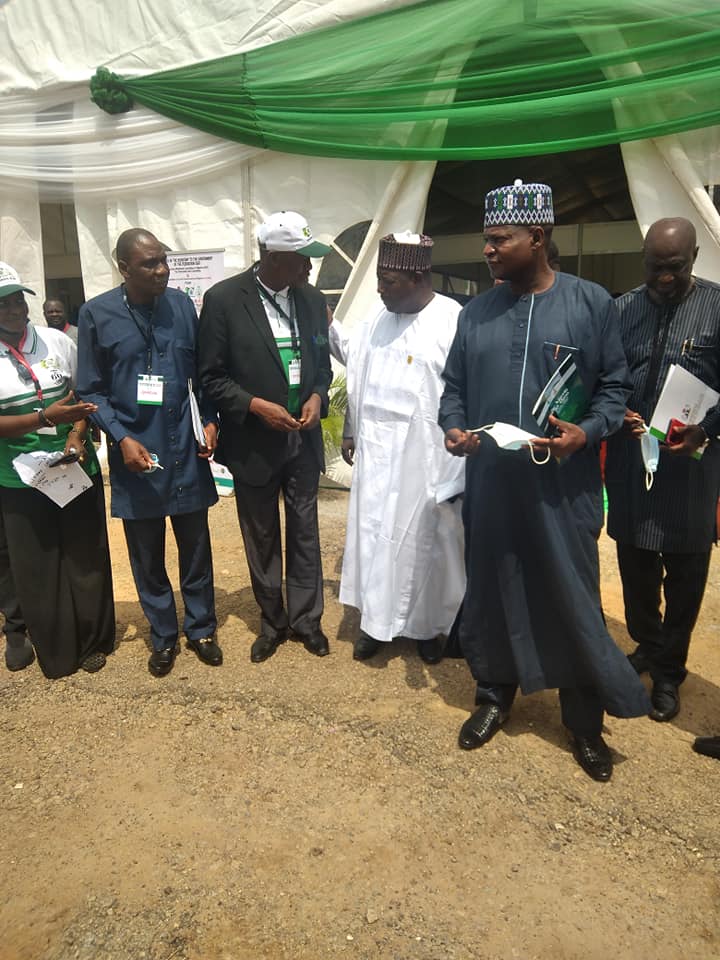 In the words of the SGF, “It is for this reason that I call on members of the Association of Local Governments of Nigeria (ALGON) to put aside whatever their difference are, and work for the common good of all. This way, they would not only have time for making their meaningful contribution to governance in the country, but also show their relevance to the ordinary people. As it is today, interactions with almost all the 774 Local Government Areas in the country does not give comfort that we work as a team”.

Concluding, the Minister said the event will help to address the need for fast-tracking and stimulating the rural economy, based on heightened Agricultural and Agro – allied Industrial and related service activities. He said it will equally attract the attention of prospective investors to the investment opportunities that abound in every local government area in Nigeria. The SGF was represented by Mr. Ariyo Benjamin, the Special Assistant to the Permanent Secretary Political and Economic Affairs.

Answering a question from our correspondent on the importance of the exhibition to the Cotton Association, the President of the Cotton Association of Nigeria said the association is trying to expand its scope in terms of production of cotton and development of the industry. He said there were many local governments in Nigeria that are not aware that cotton can be grown in their LGAs. According to him, there was a wrong notion that cotton can only be grown in the Northern states of Nigeria but that this was not the case as there are cotton farms in Eastern parts of Nigeria (Enugu, Akwa Ibom, Calabar)as well as in the western parts of Nigeria.

He said he hoped the LGA Chairmen will go back to their various LGAs and sensitize their farmers that there is a lot of money in cotton and that it will be a very good substitute for Oil in Nigeria. He said the Cotton Association of Nigeria will also like to partner with the LGA Chairmen, so that the Cotton Association can get land to do proto type farms for the people to see.

Also speaking, the Chairman of Warri North LGA, Hon. Asekutu Smart Olorunyomi said the Delta State government has built a soon to be commissioned Floating Market to help riverine communities engage in trading in a manner that will make it first in Africa. He also emphasized the need for the Koko Port to come alive and enhance the economic activities in the region. He said one of the areas he wants the federal government to concentrate on is modernized fishing system, noting that as a Maritime Captain and Sailor he knows that a lot of people will like to go to sea and earn good money and thus address the issues relating to youth restiveness and militancy in the region.

Speaking to our correspondent, the Chairman of Udu Local Government Area of Delta State, Hon. Jite Brown said in response to a question about the relationship between the local and state governments, that, in Delta State they were working independently and that they always get the support of the state government whenever they need it and that if not for the state government that has been augmenting for the LGAs, they would not have been able to pay salaries as their wage bills and statutory deductions are far outweigh the federal allocation. He said there was a need to increase the federal allocation of the local governments. 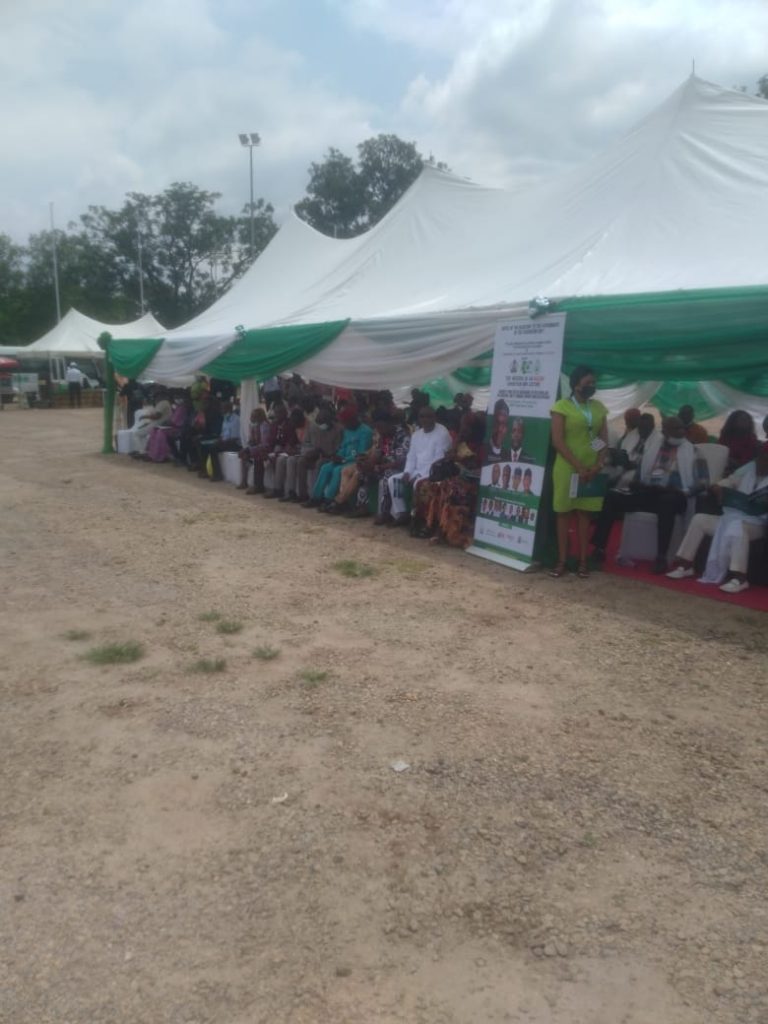 On the significance of the ALGON Exhibition and Trade Fair event commemorating Nigeria at 60 Diamond Jubilee celebration to the economic development in Small and Medium Enterprises in Nigeria, he said it was a good move that has attempted to bring all the LGAs in Nigeria together. He they have been able to showcase their local products at the federal level today. He said those who have not been able to access their products at the LGAs have been able to do that. He prayed for continuity of the exhibition as it will help the producers at the local government level as a medium of showcasing their products at the national level. 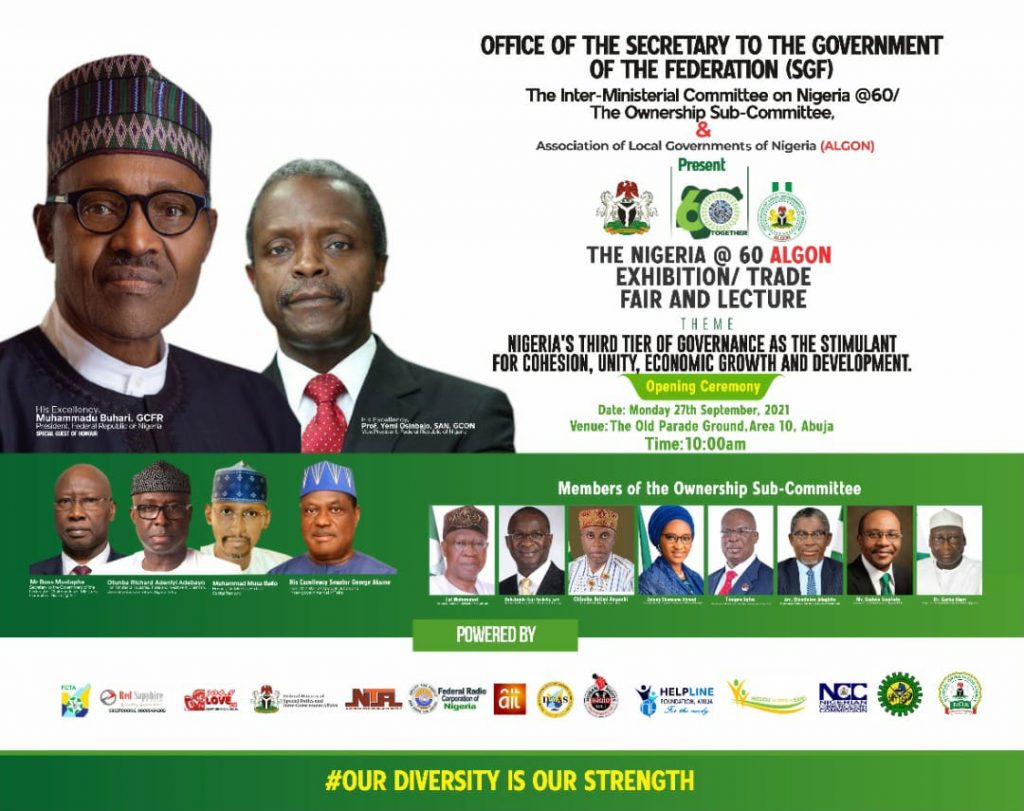 Yesterday was day one of the event that is expected to come to an end on the 30th of September, 2021. Many have asked why the event is tagged Nigeria @60 when in actual fact Nigeria is due to celebrate her 61st Independence anniversary on the 1st of October, 2021? The explanation from the organizers, Red Sapphire Nigeria Ltd is that, Nigeria turns 61 on 1st October. This event is the last event of the Nigeria @ 60 celebrations which ends September 30th, 2021.