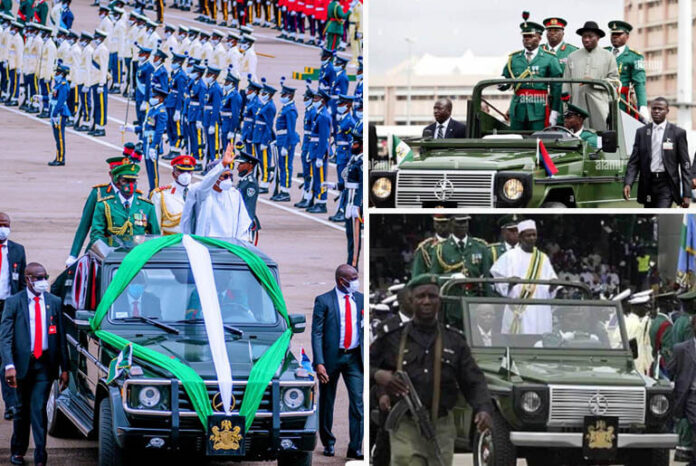 It’s public knowledge that every October 1st, since 1960 when Nigeria secured its independence from Britain, has become a ritual of celebrations of some sort. Sometimes the celebrations are loud; some other times they are low-key depending on the mood of the country.

This year’s assorted symbolic celebrations across the states and the federal capital territory (FCT) are no exemption from the ones that were held in the past by successive administrations – be they civilian or military.

By the way, it’s the last independence day celebration for President Muhammadu Buhari whose second and last term in office expires May 29, 2023. Other things being equal, a new president will be in the saddle come October 1, 2023.

As it is everywhere, Nigerians have a myriad of opinions regarding the status and station of the country 62 years after it became a sovereign nation. That is why they take to their various social media platforms and any other communication channel to express their opinions on the day whenever it’s celebrated or marked.

For this year’s celebration, I took my time to check out some of the comments of Nigerians. The comments were a bag of mixed feelings; expressions of lamentations and missed opportunities while some took notice of the gains and progress recorded over the years.

In any case, Nigeria, just like any other country in the world is full of two broad categories of citizens: There are the optimists who believe perpetually in the potential greatness of the country and the gains made over the years despite different challenges and there are the incurable pessimists who believe nothing good can come out of the country because of inefficient leadership and poor governance system that has become a recurring decimal virtually in every dispensation.

To be candid, as far as I am concerned, it was a good thing our forefathers fought hard to secure our independence from British imperialism at the time they did. There could not have been a better time to take our collective destiny into our hands than the time they did.

I also believe that those who laboured and agitated for the independence of the country — the likes of Nnamdi Azikwe, Obafemi Awolowo, Anthony Enahoro, Ahmadu Bello, Tafawa Balewa and the rest — also had a clear vision from the inception to transform it into a nation, at least going by the commonality of purpose of those men and women from different tribes, backgrounds, cultures, religion and other variables demonstrated during the struggle for independence.

All said and done, 62 years after, it is pertinent to ask whether Nigeria is now a nation bound by a common destiny or a state. Or is the country sandwiched between the two contending terminologies which are sometimes even used interchangeably when and where there’s no need for fidelity to distinguish between the two distinct terms?

For denotative clarifications, a nation, as defined by experts, is a group of people with a common language, common religion, history, culture and geographic territory whereas a state is an association of people characterized by formal institutions of government, including laws, permanent territorial boundaries and sovereignty (political independence).

As a matter of necessity, a state must have four basic elements: population, territory, government and sovereignty. For a state to be a state, all four elements must operate or exist concurrently otherwise, the statehood is incomplete. Contrarily, a nation is a group of people who have a strong sense of unity and common consciousness.

Going by the aforementioned definitions, it is safe to say that all the tribes that make up Nigeria – over 300 – could therefore be described as nations -shared culture, language, and history, among others – existing within a territory. Against this background, it is only logical to say that Nigeria is a state of many nations (tribes, ethnic groups). Little wonder some scholars and public intellectuals prefer to define Nigeria as a nation-state while some call it the Nigerian state.

But all hope to make Nigeria a true and organic nation even though tribes and tongues may differ is not lost. All that is needed is unity and a common consciousness premised on justice, equity, fairness, equality and inclusion but it has to start from the leadership cadre and then trickle down to the citizenry in a seamless top-to-bottom formation.

At all times, political leaders, including all the managers of the country’s socio-political institutions, especially at the national level, must demonstrate and engender inclusion, justice, fairness and impartiality in all their transactions as far as governance and leadership are concerned. That way, the citizens will have an abiding faith in the country that all citizens are equal regardless of their tribe, religion and ethnicity.

However, in a situation where clannishness and ethnic chauvinism are demonstrated within the leadership space, it becomes pretty difficult for discerning citizens to have confidence in the nationhood of the country. This perhaps may explain why there are occasional ethnic agitations because some sections of the country feel they have been deliberately left out in the scheme of things.

As the preparation for the 2023 general elections begins to gather momentum, I will like to encourage all Nigerian citizens eligible to vote to ensure that they cast their votes for only candidates who have a demonstrable and evidence-based record of being blind to ethnic chauvinism, tolerant of others, a unifying factor and non-discriminatory imbued with a high sense of justice and fairness into various offices. That way, the country may begin to prepare its way to transit into a true nation rather than its current state of many nations where there is mutual distrust on the bases of religion, ethnicity, political participation and the likes.

My mantra subsists: For God, family and country.