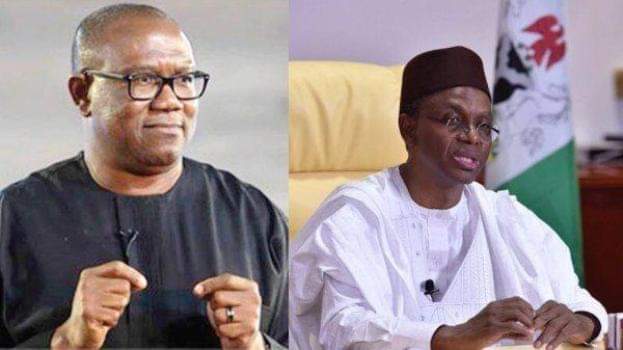 Governor Nasir El-Rufai of Kaduna State, has been receiving some knocks on social media over his reaction to a planned rally in support of the presidential candidate of the Labour Party, Peter Obi, in his state capital, Kaduna.

A tweep, Abdullahi Umar Zarma, had tweeted a call for a two-million man march in Kaduna for Peter Obi. Quoting the tweet, El-Rufai dismissed the possibility of 200 persons coming for the rally and referred to south-easterners as ‘imports’.

He said, “In Kaduna? Not Kaduna Twitter? – I hope you get Two Hundred persons on the streets… including those ‘imports’ that can’t open their shops on Mondays and came on overnight bus last night!! I jus’ dey laff, wallahi tallahi!!”

Reactions have been trailing the governor’s tweet, with a number knocking him for being insensitive.

Aisha Yesufu said, “As Governor who has been muscled by terrorists you surely know better right? Since even you as Governor has been restricted and left with writing letter to ICCIF!”

“The beautiful thing about the democratisation of social media is that you are not powerless. This hateful tweet disgracefully employs a racial stereotype that might expose peaceful marchers to real world harm. But you CAN act,” Ose Anenih tweeted.

Another tweep, Oyin D said, “El Rufai just called the Obidient Movement IPOB by talking about shops that don’t open on Monday. My Kaduna people, you guys have been affected by terrorism in the last couple of years, this is the time to show this man that power truly belongs to the people. Come and walk with us.”

Adewale Adetona tweeted, “From a sitting governor? This is so unnecessary and definitely not a way to foster a United Nigeria. Our so-called leaders keep fuelling unnecessary hate and bigotry.”

Alhaji Yusuf tweeted, “What about us that can’t travel from Kaduna to Abuja throughout the week because of bandits? Decorum and civility is what you El Rufai should understand. Your tweet lack appropriate social behaviour, hence you should keep quiet.”

FRANCIS ERHABOR, PROMOTED AT LAST TO ASSISTANT COMMISSIONER OF POLICE