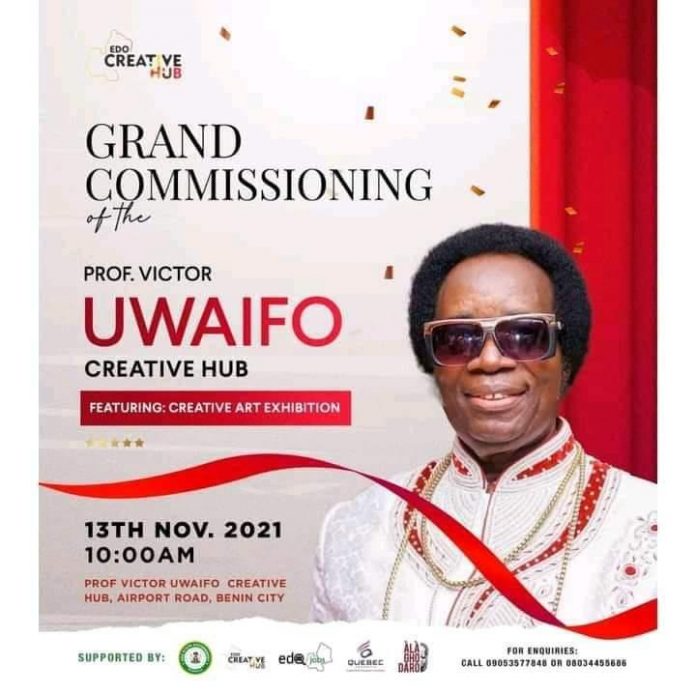 The concert, with the theme, ‘The Guitar Boy Lives On’, will take place by 6 pm at the Prof. Victor Uwaifo Creative Hub, Benin City, as part of activities lined up for this year’s Alaghodaro Summit.

The Alaghodaro Summit, in its fifth edition, takes place between November 12 and 14, 2021, with the theme, “Edo of Our Dreams: Building a Sustainable Future.”

Chairman, Marketing and Branding Sub-Committee, Alaghodaro 2021, Crusoe Osagie, who spoke to journalists in Benin City, said the live concert will take place after the Grand Commissioning of the Prof. Victor Uwaifo Creative Hub and an Art Exhibition.

Other artistes expected at the live concert include Ayra Star, Johnny Drille and DJ Neptune, among others.

According to Osagie, “This concert, which is organized in honour of one of our illustrious sons, Sir Victor Uwaifo, is part of the government’s constant engagement with Edo youths, who are major drivers of the state’s economic growth.

“It would interest you to know that one of the lead acts, Waje, was raised in Benin City, and aside from featuring as an act for the concert, will also inspire youths in the state.”

He further stated, “The concert will be preceded by the Grand Commissioning of the Prof. Victor Uwaifo Creative Hub and Art Exhibition by 11 am.”

Restating the government’s commitment to the state’s creative sector, Osagie said, “The newly built Edo Creative Hub, which is to be named after the late guitar boy, Sir. Victor Uwaifo, is a multi-million-dollar studio to support artistes and other creative talents in the state.

“It has editing suites and incubates state-based groups and artistes. The facility will be used for live shows and has studios for Nollywood to rent for their productions. The hub also has spaces for artistes in the performing arts. With this and so many other ongoing projects by this administration, we will be able to harness the creative potentials of Edo youths.”

HOW BIG WIZ CLOSED 2021 WITH VIBES ON THE BEACH