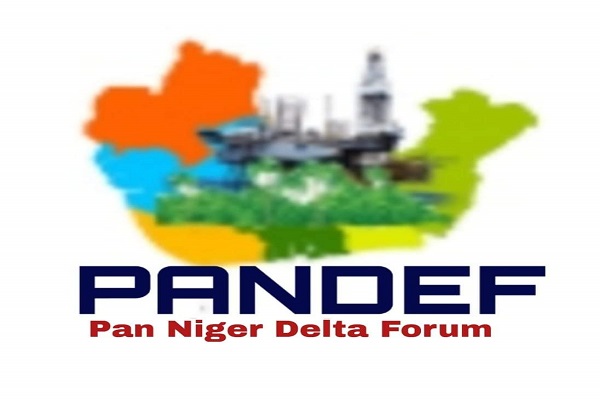 The Pan Niger Delta Forum, PANDEF has condemned the statement credited  to the Minister of Humanitarian Affairs, Disaster Management and Social Development, Sadiya Umar Farouq and said her utterances shows that she is not fit to be a minister.

A Press Statement signed by Hon. Ken Robinson, the National Publicity Secretary of
PANDEF on Friday, November 4th, stated that, “Pan Niger Delta Forum, PANDEF, has berated the Minister of Humanitarian Affairs, Disaster Management and Social Development, Sadiya Umar Farouq, for her recent cynical comments on the 2022 flood situation in the country.”

“The Minister of Humanitarian Affairs was ignorant enough to announce, during the recent weekly Ministerial Briefing on Thursday, that Jigawa State is ranked as the most affected State in the country and that Bayelsa State is not even among the ten (10) worst affected states. This is a brazen assault on the sensibilities of Nigerians and an attack on logic. It is indeed provocative.

“The Minister who was reacting to questions raised by Elder Statesman and PANDEF National Leader, Chief Edwin Kiagbodo Clark over the federal government’s lackadaisical attitude towards States affected by the flood disaster, especially in the Niger Delta, and perhaps irked by his patriotic observations, decided to throw caution to the wind and descended into the gutters of absurdity.

Continuing,  the statement said, for the avoidance of doubt, we would like to render extracts of what our revered elder statesman and National Leader posited in his press conference, “In the area of life ravaging flood, I don’t even think that the President is aware of the magnitude of the national crisis the nation is being threatened with, when he had not found it necessary to hold the children who look for forlorn, to give them hope and assurance that the nation truly cares for them. People are dying in the flood, people are starving. No water for them to drink, and yet, the President does not care, where is the milk of human kindness in him?”

“We have a Minister of Humanitarian Affairs who is not humane, who was only active to carry out school feeding for school children who were confined to their homes during Covid-19. In such a period of ravaging flood, she has decided on disconcerting silence. Bodies like National Emergency Management Agency were not able to take proactive action. Where is the mother of the nation, the First Lady, Aisha Buhari? Her fellow women are in deep agony, seeing their children dying of starvation and mild illnesses because there was no medication.”

“Is it not an irony that as President Buhari abandoned us to travel to South Korea without visiting the flood-ravaged communities, his departure from that country was met with a similar accident there (a stampede) in which 150 people died? Immediately, the President of that country arrived at the scene in Seoul to commiserate with the survivors and victims. South Korea even declared a national mourning period for the deceased. Likewise, at about the same time, there was the collapse of a bridge in India, resulting in the death of 100 persons, which occasioned the immediate visit of the Indian Prime Minister.

“On both occasions, our own President was kind enough to send condolence messages to the two countries and the people, but President and the government here, at home, had kept mute over what our people are passing through in the Niger Delta and a few other places.

“The parameters adduced by the Minister in arriving at her reckless conclusions are morbid and ridiculous; it is this kind of “upside-down” thinking that has pummelled Nigeria to its present dire state.

PANDEF said it is worried that the Minister’s assertions could heighten the feelings of alienation and dissension in the country and that her remarks have been greeted with spontaneous reactions and widespread condemnation across the Niger Delta, particularly Bayelsa State, where the government and the people have been grappling with the massive devastation caused by the floods.

It noted that the Minister had earlier claimed that only four Local Government Areas of Bayelsa state were impacted by the unprecedented flood.

“PANDEF is worried that the Minister’s assertions could heighten the feelings of alienation and dissension in the country. Her remarks have been greeted with spontaneous reactions and widespread condemnation across the Niger Delta, particularly Bayelsa State, where the government and the people have been grappling with the massive devastation caused by the floods.

“PANDEF notes that the Minister had earlier claimed that only four Local Government Areas of Bayelsa state were impacted by the unprecedented flood.

PANDEF faulted what it referred to as the crass irrationality displayed by Sadiya Umar Farouq making her unfit for the office of Minister of the Federal Republic of Nigeria. It said she should, therefore, resign immediately or be sacked.

“The crass irrationality displayed by Sadiya Umar Farouq makes her unfit for the office of Minister of the Federal Republic of Nigeria. She should, therefore, resign immediately or be sacked.

“How can a state up North, like Jigawa, be worst impacted when indeed Bayelsa State has the unfortunate responsibility of receiving the flood water that ran through more than 15 states? As it has been rightly queried.

“PANDEF concedes that the floods had ravaged several states of the country, however, it has been admitted by those entrusted with knowledge on this matter, including experts from the Federal Ministry of Water Resources, Nigeria Meteorological Services Agency, Nigeria Hydrological Services Agency and intellectuals that the States of the Niger Delta, being the final point where all flood water gathers are most impacted and submerged.

“As a matter of fact, in a State such as Bayelsa, almost every part was reportedly submerged and people in most communities were helplessly displaced. For a period now going on to one month, entire communities are underwater, tens of people dead, millions of people displaced and unquantifiable levels of farmlands, fish farms and properties destroyed, and schools have closed.

“From first-hand reports, Bayelsa State has been cut off from the rest of the country because the ravaging floods had cut off the East-West Road on the Patani axis from the West at 2 spots and the East at 3 spots on the Mbiama – Ahoada axis, making it impossible for commuters to ply the road. Today, Bayelsa State can only be accessed via the waterways or by air.

“What is most shocking is that despite the great publicity on the destruction caused by the floods, our President, the “Father” of the Nation, His Excellency Muhammadu Buhari, has refused to visit the affected States in the country, and it would appear, has no interest at all to do so, to show empathy and give succour and moral boosting to our people. Sadly, neither the Vice President nor the Senate President, Speaker, House of Representatives or Secretary to the Government of the Federation has found it necessary to even make a casual visit.

“Worse even, the Minister of Water Resources or the “almighty” and untouchable Minister of Humanitarian Affairs, Disaster Management and Social Development or their colleague, the Minister of Environment whose ministries have direct relevance to the situation, have not thought it fit to visit the affected communities in the Niger Delta. This is shocking and nearly unbelievable.

“Given the apparent abandonment by the Federal Government and its agencies, PANDEF profoundly unduly commends the Government and people of Bayelsa State, and communities in Delta, Rivers and other States of the Niger Delta affected by the floods, for their resilience. The Niger Delta region continues to be the goose that lays the golden egg including providing the funds that enable the President to travel around the world and other top officials of the Federal Government in Abuja, including the Minister of the so-called ministry of Humanitarian Affairs, in running their exaggerated programmes. Yet, we are being neglected.

A humongous sum of money has been, reportedly, approved to fix sections of the East-West Road that were severed by the floods, we hope that there will be value for money this time.

“Conclusively, the assertions by Sadiya Umar Farouq further reflect the uncouth arrogance and callous disregard being accorded to issues about the Niger Delta region and its people, by the federal government.

“As the tears of pain and grieve over the great loss of loved ones and the unbearable level of human suffering and destruction of properties sweep across the Niger Delta, the Pan Niger Delta Forum (PANDEF) on behalf of the Elders, Leaders and People of the South-South geopolitical region, the most impacted in the country from the ravaging flood 2022, is asking:

“Why has President Muhammadu Buhari abandoned the victims of the floods, especially in the Niger Delta?

“Why has the Federal Government neglected our people, even at this time?