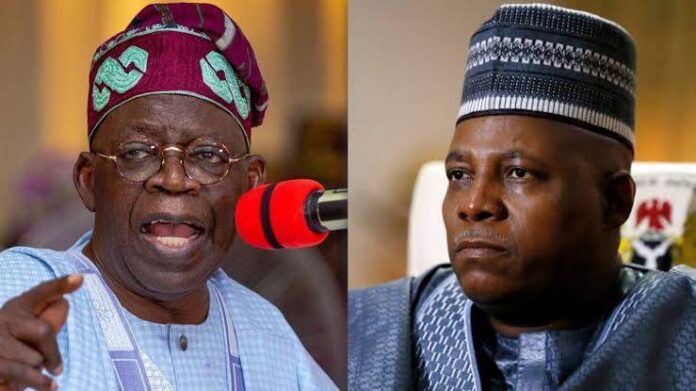 APC Vice Presidential Candidate And His Sufficient Warnings For Nigeria.

A programme organised by Tinubu and Shettima to sell their baseless manifesto to the business community in Nigeria was expectedly converted into a comedy show.Shettima exposed his lack of knowledge and in his unserious mind derided the investment of the PDP presidential candidate,Atiku Abubakar in the production and processing of bottled water.He was talking to business leaders in Nigeria. lam sure that the credible businessmen and women in the hall were disappointed .It is expected that those that are into fraudulent businesses,such as crude oil theft,kidnapping,etc,will applaud Shettima.

Tinubu and Shettima in the usual APC style of deceit are promising assistance and intervention in the growth of small,medium and large scale enterprises if they are elected.They are quoting bogus figures of employment that they will create.The contradictions and fake tendency of Tinubu/ Shettima manifesto is obvious from the derogatory reference of Shettima to the bottled water business of Atiku Abubakar.How can you be promising jobs creation and be trivialising an enterprise that is already creating millions of direct and indirect employment in Nigeria?

Tinubu supporters continue to talk about building on his legacy as the governor of Lagos State if he is elected as the President of Nigeria.Which legacy of Tinubu are they are referring to? As governor of Lagos State,he did not support the independence of the House of Assembly.He did not support the autonomy of Lagos StatevJudiciary.He did not support the autonomy of Local governments in Lagos State.He has no legacy on policy and administration for the survival of democracy in Nigeria .He did not invest in Agriculture ,aviation, despite the high population in Lagos State and a centre for domestic and international air travellers.On the economy side ,Tinubu legacy is increase of taxes on the producers of bottled and sachet water ,and imposed high daily collection of rates on struggling Nigerians that are selling the bottled and sachet water.

Shettima’s legacy is the kidnapped of Chibok school girls when he was the governor of Borno State.Up till today,some of the kidnapped school girls are still held by the kidnappers.He was under his watch as governor of Borno State that Boko Haram and other acts of terrorism escalated in Nigeria.Shettima has no idea of genuine businesses in Nigeria,but only familiar with talks and excuses for continuous kidnappings and ransome payments in Nigeria.In a serious countries,such characters like Shettima should be isolated from the social and political circles of the country.It is this character that APC are asking Nigerians to elect as the vice president of Nigeria.

Atiku Abubakar is one of the highest employers of labour in Nigeria.Through his investments in bottled water,Agriculture ,Education,Health,etc,he has created income for Nigerians and revenues for Local,State and Federal governments through the payment of taxes.

The producers of bottled and sachet water and thousands of Nigerians that are directly and indirectly employed in this enterprise should reply Shettima and his APC with a total rejection in the 2023 presidential election.

Shettima comment against bottled water is not only warning for Nigerians that are engaged in the enterprise ,but sufficient warnings for all Nigerians that are struggling for a legitimate means of livelihood.Shettima and APC are enemies of genuine businesses in Nigeria.

If Tinubu and Shettima come to you to promise employment generation and support for businesses ,ask them about their personal investments in the economy of Nigeria.

Antecedents,approach to public policies and comments of Tinubu and Shettima are sufficient warnings for Nigerians to avoid APC and reject Tinubu/ Shettima in the 2023 presidential election.

Dr.Isaiah Osifo is the Pioneer Chairman of Edo State chapter of the Association of Local Governments of Nigeria,( ALGON),And a University Teacher. Email- [email protected]