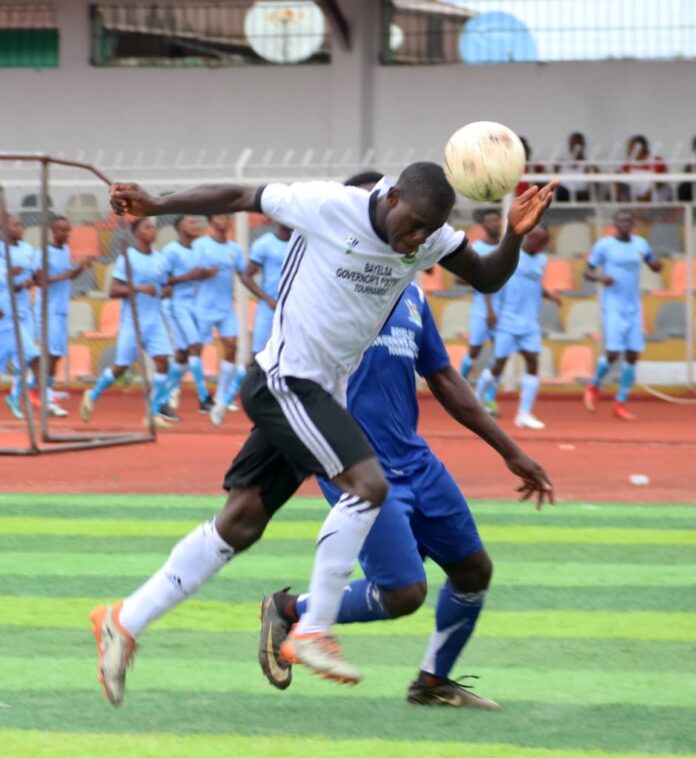 The Bayelsa State Governor’s Football Tournament Christened the Prosperity Cup in the last five years has been the most attended grassroots football showpiece in Nigeria.

The tournament has produced noticeable names in Nigeria football such as Okardi Inikurogha who is currently with French second division side Grenoble Foot 38 and Victory Beniangba one of best talents in the Egyptian league.

Okardi Inikurogha won the tournament with Ewoma Fc of Brass in 2016 were he became the Most Valuable Player during the competition and was immediately snatched by Bayelsa United.

The 2020 Prosperity Cup enters the semifinal stage on Friday after over 200 games played across 20 different centers in the eight local government areas in the state.

Odioma Fc of Brass, Anyama Fc of Ogbia, Agbere Fc Sagbama and Eternal Grace Ministry EGM Fc of Yenagoa are the remaining teams left in the competition after weeks of interesting football that produced heroes for  their communities.

To get to this stage Odioma fc beat former Peretorugbene United 3-1 on penalties while Anayam Fc of Ogbia advanced to the semi final with a 2-1 victory over Agbayama Fc of Ekeremor, Agbere Fc pummeled Amassoma Fc of Southern Ijaw 4-2 while EGM Fc spanked Okoroma Tereke of Nembe 2-0 to have to date with Agbere Fc of Sagbama.

Coaches of Anyama Fc, Agbere Fc, Okoroma Tereke Fc and EGM Fc in a pre match interview with the prosperity cup media said they are very prepared for the game.

Anyama Fc coach Ebisouodo Appah said he is expecting a cagey encounter with his eastern opponent Odioma Fc due to their experience in the tournament compared to his Anyama side that are playing for the first time outside Ogbia LGA.

He noted the prosperity cup has exposed the lads to play at the Samson Siasia stadium for the first time in their life, and expressed optimism of playing in the final.

Agbere Fc coach Ebi Amula noted that it is thing of joy to guilde Agbere Fc to this stage of  the competition, having dispatched Amassoma Fc in the quarter final.

Coach Amula who explained that the tournament has given the young lads from Agbere Fc the opportunity to showcase their talents, said he would approach the encounter like a cup final.

Having moved to the semifinal Odioma Fc coach Karika Hanson said they are going with attacking and defensive pattern which according to him has been their area of strength since the commencement of the competition, adding that his aware of his opponent’s sharpness in front of goal.

EGM Fc coach Micheal Felix asserted that this is the best opportunity for him and his side to lift the prosperity cup having participated since the inception of the competition, stressing that he is positive of victory against the Sagbama based side.

The EGM gaffer added that with the caliber of players in his possession , the Yenagoa based side is capable of beating any team.