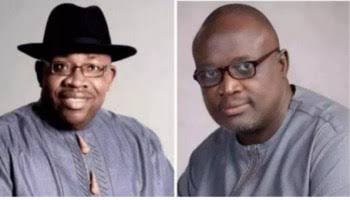 The Bayelsa West Youth Congress has said that the only existing arrangement in the Senatorial District as regards election to the Senate and House of Representatives, is BALANCING and not ZONING.

This information was made known in a press statement signed by Ebide Brown, the group’s Chairman and Hitla Moses, the group’s Publicity Secretary for and on behalf of the Bayelsa West Youth Congress.

Find below a full text of the press statement:

There has been no valid and accepted zoning arrangement in Bayelsa West. The only existing arrangement one can refer to is balancing and not zoning. At every election people have always canvassed for zoning while others opposed it. Both the leaders and the people have had divergent views on this from 1999 till date.

In 2020 before the bye election, another attempt was made to resolve this when they convened a meeting in Sagbama. As in previous times, this meeting was heavily criticised, condemned and boycotted and it’s communique and outcomes rejected by so many leaders and stakeholders who argued that the best candidate should always emerge with political parties being at liberty to field candidates of their choice.

The APC, the leading opposition led the boycot and rejection and went ahead to violet the communique which stated that the Senatorial bye election should be left for candidates from the Sagbama LGA ONLY by all political parties. The APC, to underscore its rejection of the communique fielded His Excellency, Chief Peremobowei Ebebi, from Ekeremor LGA, as their senatorial candidate in the last bye-election at a time the LGA already had Hon. Fred Agbedi as a sitting member of the House of Representatives.

This act, in itself, violated the principle of balancing as well as zoning. The purported zoning accord was therefore dead on arrival even before the elections began.

There were several delegations and plea to both Ebebi and the leadership and supporters of the APC, but they paid no attention to them. No leadership or group from Ekeremor emerged to condemn the stance of the APC and it’s candidate. Rather, so many Ekeremor leaders and stakeholders campaigned publicly for the APC and Chief Ebebi and proclaimed that there was no zoning.

The above narrative confirms that there is no generally accepted zoning arrangement. Even the concept of balancing has been destroyed in Bayelsa West Senatorial Zone.

Almost all the Ekeremor leaders and stakeholders talking about zoning were the same persons who argued and campaigned against zoning. They are the same persons who failed to stop Ebebi and the APC from destroying the principle of zoning and balance. Even Hon Fred Agbedi, the House of Representatives member never attended the Sagbama meeting nor signed the communique therefrom. He and other PDP leaders from the area secretly encouraged Ebebi and the APC, but failed due to the massive support given to the PDP and it’s candidate.

People confuse BALANCING with ZONING. Balancing is when the two offices are shared to both LGAs in the senatorial district and happily we have two large LGAs in one Senatorial District, unlike the other six LGAs in the state that have three LGAs each. On the other hand, zoning is when the various political parties and every stakeholder agree in a binding way that, a particular office should remain in a particular area for a given length of time. This is not the case in Bayelsa West and it has never been the case in Bayelsa West.

Can those talking of zoning answer the following questions?

Why did Ekeremor leaders and those who are in support of zoning not prevail on the APC and Ebebi not to contest in the last senatorial bye-election in 2020?

What is the effect of the so-called zoning and the communiqué at the Sagbama meeting when the APC and Ebebi openly rejected it and protested its outcome?

Why did the APC have aspirants for the senatorial bye-election from Ekeremor in the person of Ebebi, Hon. Kemelayefa Omonibeke, Mr. O. J Martyns and others from Ekeremor if there is a zoning policy agreed by us all?

Why did the APC not give its senatorial flag to Hon. Capt. Matthew Karimo from Sagbama or Chief Ebitimi Amgbare, Major Andrew Oputa or other leaders who were interested from Sagbama to clearly underscore zoning as demanded by the Sagbama communique they are referring to.

Do they know that Ebebi scored almost 20,000 votes in the last election showing that a large number of our people do not believe in zoning, but rather voted for candidates of their choice based on capacity and party affiliation?

Do they know that even after losing the general election, Ebebi relied on Federal might and the treachery of some PDP leaders, to challenge the election result up to the Supreme Court where he lost?

Have they forgotten so soon that the calculation and plan of the APC and its leadership was that Ebebi with the support of some disloyal PDP members backed by federal might would defeat Senator Dickson and create a political upset which failed woefully?

Have they forgotten so soon too that, both Senator Dickson and several stakeholders pleaded with Ebebi severally not to accept the APC offer in order to consolidate the proposal on zoning but they refused which made the election to be the most expensive and seriously contested Senatorial election in Bayelsa State? They did not stop there but took the litigation up to the Supreme Court.

If Ebebi and the APC had won the bye-election or at the tribunal, would these people still be talking of zoning and what would have been the fate of Sagbama Local Government Area?

Do these people honestly think that blackmailing Senator Dickson and his overwhelming supporters with zoning will deter him if majority of our people feel that he should re-contest?

What is so difficult for persons so wanting to go to the National Assembly in Bayelsa West to campaign on the basis of their capacity and achievements instead of hiding behind the non-existent zoning policy that has never been implemented?

Where are the names of Hon. Fred Agbedi, Chief Fedude Zimugha and Chief Martyns Agbede on the so called zoning communique at Sagbama? They also joined in the boycott of the meeting and they did not sign the communique.
Today, they are the ones shouting zoning.

We therefore, call on our people not to be misled by mischief makers, propelled by envy, ambition and ingratitude. Majority of our people believe that Senator Dickson should be prevailed upon to recontest the forthcoming Senatorial election, to continue to effectively represent Bayelsa West, Bayelsa state, the Ijaw nation and the Niger Delta at large at the national Assembly.

Listed below are the names of those who opposed zoning and balancing.

1. Chief Peremobowei Ebebi: The former Speaker and Deputy Governor was the APC candidate in the last Bayelsa West Senatorial bye-election.

2. Chief Alex Ekiotene: An elder statesman who repeatedly said there was no zoning.

4. Honourable Chief Christopher Enai: A notable political leader who argued that there was no zoning and supported the APC candidate.

22. The Local Government and State officials of APC from Ekeremor and several other leaders.

Elders from Sagbama who in the last bye-election said there was no zoning and therefore supported Ebebi even against the background of Hon. Fred Agbedi being already in the House of Representatives are as follows:

5. Hon. Williams Ofoni: He was campaign manager of the APC and Ebebi from Sagbama.

These so-called stakeholders should stop the propaganda against Senator Dickson and the people of Bayelsa West Senatorial District, Bayelsa State and the Niger Delta in general and contest elections on their own if they so wish.

Bayelsa West people, please be ware of these blackmailers.

Signed by:
Comrade Ebide Brown, Chairman and
Hitler Moses, Publicity Secretary, for and on behalf of Bayelsa West Youth Congress.