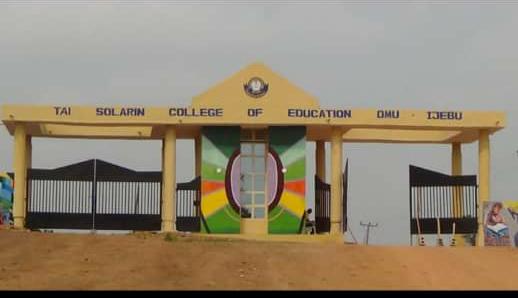 The statement quoted the Punch Newspaper, While shedding light on the ranking criteria, saying the Management of Webometric, a leading Spain-based Institutions’ ranking organisation stated that four ranking factors were used which include; openness rank, impact rank, presence rank, and excellence rank.

It noted those four factors were the criteria used to determine which Polytechnic tops the table out of all Polytechnic Institutions in Nigeria.

The Ranking Web or Webometrics is the “largest academic ranking of Higher Education Institution” based on the assessment of Composite Indicators and Web Impact Factors”.

This has culminated into vast improvement in the delivery of maximal pedagogical services in the higher institution.

So far, in the course of Kiadese’s fruitful administration, TASCE has experienced it’s best days in terms of quality education and increase in necessary facilities. All of these have not gone unnoticed by the leadership of NANS in Ogun State.

“We hereby urge the Ogun state Governor, Prince ‘Dapo Abiodun to speedily assent to the bill seeking to rename Tai-Solarin College of Education to The Sikiru Adetona College of Education, Science and Technology. The bill has since been passed by the Ogun State House of Assembly.

“According to the lawmakers, the passage of the bill was meant to put in place legislations targeted at addressing the identity challenge being faced by the college of education in accessing intervention funds, while broadening its scope and operations as well as positioning the institution for better academic performance.

“It is our sincere belief that the renaming process if completed will remove encumbrances being faced by the institution in accessing intervention funds and other challenges,” the statement said.