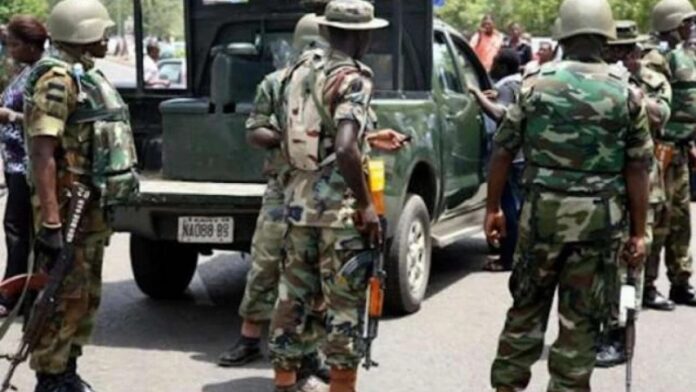 Some persons suspected to be bandits, who have infiltrated Lagos State, have been arrested by security agents.

It is reported that the suspects, who were clad in Military camouflage and other accoutrements, were picked from different parts of the state.

Some of them, as reliably gathered, were drafted by their sponsors to survey some areas in Lagos.

Some of the arrests, as gathered, were made by the Department of State Services (DSS), and the 81 Division of the Nigerian Army.

Outgoing General Officer, 81 Division of the Nigerian Army, Maj. Gen. Umar Musa, disclosed this on Tuesday, during the handover ceremony, that the Division arrested many impersonators while he was GOC 81 Division.

Though he did not state if they were bandits, he disclosed that the supplier of the army camouflage to the impersonators had also been arrested.

In an interview with journalists at the 81 Division headquarters in Kofo Abayomi, Victoria Island, Maj. Gen Musa, said: “I can’t remember how many impersonators we have arrested. But we still have quite a large number of them. When we make arrests we hand them over to the Nigeria Police to do further investigation and prosecute them because we don’t have the power to prosecute.

“There has been progress to clamp down the sources of these uniforms and accoutrement. We had one suspect who had been in our place for quite some time. He also has been handed over to the DSS which will do further investigation and prosecute him. The Nigeria Customs Service is also doing a lot in this regard,” he said.

While appreciating the Chief of Army Staff for giving him the opportunity to serve as GOC 81 Division, he hinted that the division under his watch was able to surmount the challenges encountered.

He, however, urged Nigerians to see the war against insurgency as all-inclusive and not just for the Nigerian Army.

He said, “You are all aware of how threats have taken over the country. We as the Army are doing our best to ensure we curtail all these activities. I want to assure civilians that the Nigerian Army is doing its best to ensure the country remains peaceful.”

Also, in his admonition to journalists, Maj. Gen. Umar said, “Whatever we do, assist us to blow our trumpet so that the enemies of the state will know we are subduing them.

“They are not our enemies but enemies of the state. Sometimes there is a misconception that the war we are fighting is the Nigerian Army war, no! The war is a state war.

“On social media, people talk as if we are the targets. If this country is in disarray, the safest people will be the armed forces because we know where to be with our families, while the greatest people that will feel the heat are the civilians.

“But civilians don’t seem to be cooperating, they act as if the war is against the Army,” he added.

While appreciating the staff officers who worked with him, he appealed to them to extend similar cooperation to his successor, Major General Obinna Ajunwa, whom he described as a friend, by doubling their efforts to surmount the current security challenges.

In his farewell message to the staff officers, Umar said, “Leave up to expectation, guide your subordinates and always pass down instructions to them. Tell your troops to remain loyal to the government of the day. In the Army, loyalty is 100 percent, not 99 percent.”

On his part, the incoming General Officer Commanding 81 Division, Maj. Gen. Obinna Ajunwa, assured that he would continue from where his predecessor stopped.

He said, “In the military there is no vacuum; also in the strategy. So far, the strategy is working. Once I am settled, I will study the strategy and if there are gaps, I will find a way to mitigate such a gap.

“I only request that the support you (staff officers) gave my predecessor should be extended to me,” he added.