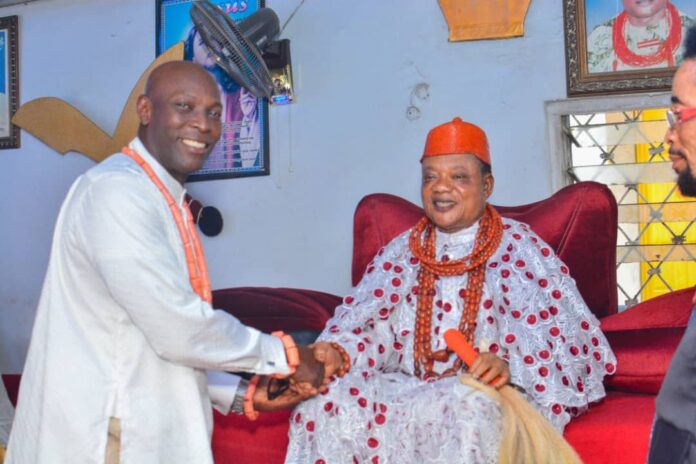 Thursday, 24th, November: Ahead of the 2023 general elections, the All Progressives Grand Alliance, (APGA), candidate for the Delta Central Senatorial District, Mr. Peters Omaruaye, led a consultative forum on a visit to the palaces of the Royal Highnesses, Samson Oweh, Ogugu 1, The Osuivie of Agbarho Kingdom; Wilson Ojakovo Oghoghovwe Oharisi III, The Ovie of Ughelli Kingdom; and Okiemute Onajite, Igere 1, The Ovie of Ogor Kingdom. The occasions took place in their various palaces, all in Ughelli north local government area of Delta State. 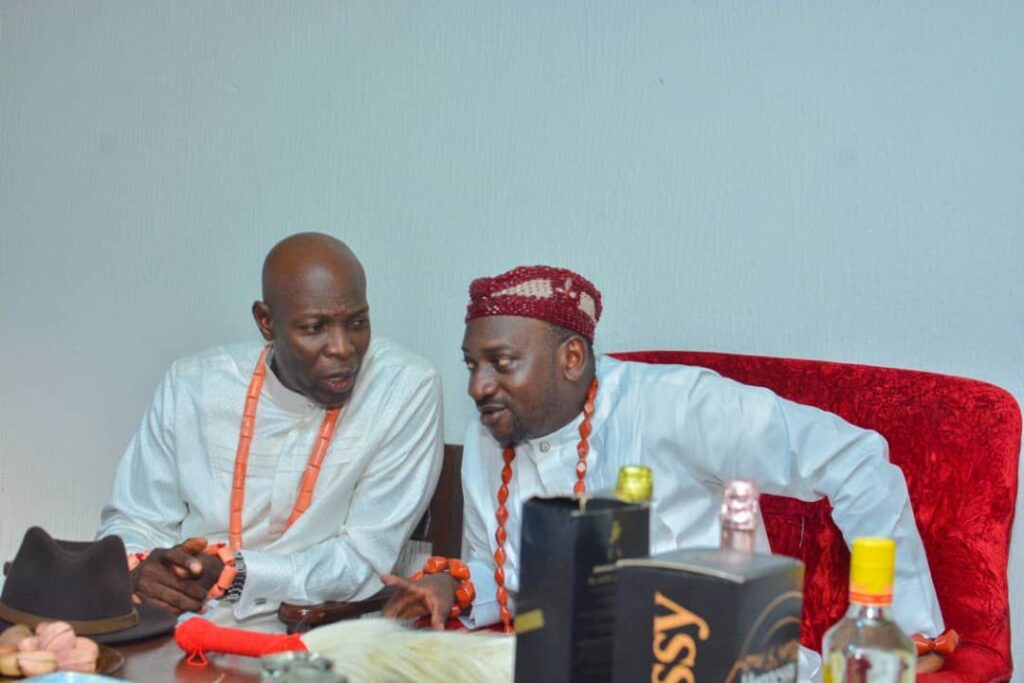 The visits began at the palace of His Royal Highness, Samson Ogugu 1, The Osuivie of Agbarho Kingdom. While welcoming the delegation, The Osuivie urged his subjects to vote based on their conscience, noting that Mr. Peters Omaruaye “is the first son of Agbarho Kingdom to contest for the Delta Central Senatorial seat”.

Mr. Omaruaye told the Agbarho monarch that he and the other candidates came for his prayers and blessings, and to formally inform the monarch of their intention to contest in the upcoming 2023 elections. “Your son is here with other candidates who are contesting for other positions within the district, to seek for your prayers and support”.

Omaruaye spoke fervently about the lost opportunities in elections past, in which the Great Ogboru political family won victories but where written out by the use of ‘incident forms’, a practice for “cheating the people out of their choices”. The new amended electoral act, which recognizes the Bimodal Voter Accreditation System (BVAS), has erased the need for the use of ‘incident forms’ for future elections. The 2023 elections will be based on ‘one man, one vote’, which will translate into victory for the ‘Ogboru political family’ contesting under APGA!

He spoke wistfully of the efforts made by Great Ogboru to alter the destructive path that was foisted on Delta State by past governments, and assured his Royal Highness that when elected, Great Ogboru intends to better the lot of the people. Omaruaye assured the monarch that he will bring equity to the distribution of the ‘dividends of democracy’ when elected to represent Delta Central Senatorial District, Urhobo land, in the red chambers.

At Ughelli the forum was well received by his Royal Majesty, Oharisi 111. Oharisi 111 prayed for Omaruaye’s victory, noting that it was “time for Omaruaye to emerge as Senator representing Delta Central”.

The highlight of the Ughelli visit was by Chief Claver Egbedi, a leading member of APGA in Delta State. He addressed the burning issue of the moment pertaining to the ‘dividends of democracy’ due to ALL Urhobos, but being ‘highjacked’ by the current serving Senator; Senator Ovie Omo-Agege. Chief Egbedi urged HRH Oharisi 111 to please inquire of Omo-Agege, “if he ever was to visit” as to “what happened to the Urhobo and Isoko slots for the pipeline surveillance jobs?”, and “Why are all of the federal projects allotted for Urhobo land being allocated to one particular ward in Orogun from where Senator Omo Agege hails from”.

Chief Egbedi asked, with a ting of irony, if Omo-Agege was an Urhobo senator, or an “Orogun senator”? Given this, He stressed the need for the people of Delta State to consider carefully who to vote for as their next governor in the 2023 elections.

In his response, The king appealed to the youths and the women to get their voters card and to choose leaders with integrity like Omaruaye, “who have the fear of God”.

The courtesy calls ended with the last call of the day to the palace of HRH Okiemute Onajite, Igere 1, The Ovie of Ogor Kingdom. Omaruaye was warmly received by HRH Okiemute Onajite, Igere 1. They exchanged pleasantries, with several Chiefs in attendance who are golfers acknowledging Mr. Peters Omaruaye as their ‘golf captain’ at the Warri Ogunu golf club. Omaruaye has been elected twice as the captain of the Warri Ogunu golf club, a feat never before achieved by any other previous captain of the club.

With pleasantries out of the way, Omaruaye told HRH Okiemute Onajite, Igere 1, that he “had the pains of the Urhobo Nation at heart”, and is prepared to work hard, if given the mandate to change the narrative by the Urhobo nation. He noted that he has been involved in politics for the last 25 years. He acted in the capacity of campaign Director General (DG) for the Ogboru campaign under the banner of the Labour Party in 2015, and again, for the ‘Ogboru progressive programs’ to liberate Delta State under the banner of the APC in 2019. Omaruaye recounted that he has been a business man in Delta State for the last 30 years, and an employer of labour for that duration. As a result, he has touched the lives of countless numbers of Urhobos who have been in his employ during this period. 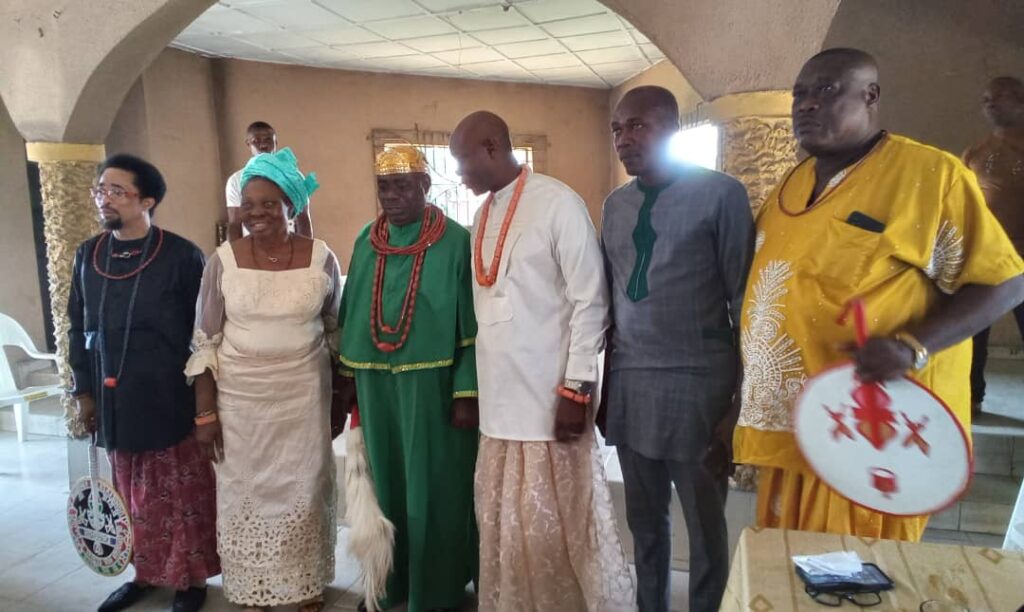 As a business man, an employer, a captain of a leading golf club in the country, Omaruaye stressed that his biography gave him a well rounded sense of what the people of the Central Senatorial District require from Abuja. Recounting that he has the ability to attract prominent business men and national leaders to Urhobo land, as was witnessed during his inaugural as a captain for the Warri Ogunu golf club. During this inauguration, he was able to attract numerous national leaders in busness and politics to Warri from all across Nigeria. Omaruaye insisted that not withstanding his antecedents, humility and a deep knowledge of Urhobo traditions require that he inform the Royal fathers of his intent, and seek their blessings and prayers.

HRH Okiemute Onajite, Igere 1, prayed for Omaruayes success and urged all to “vote in” the right candidates.