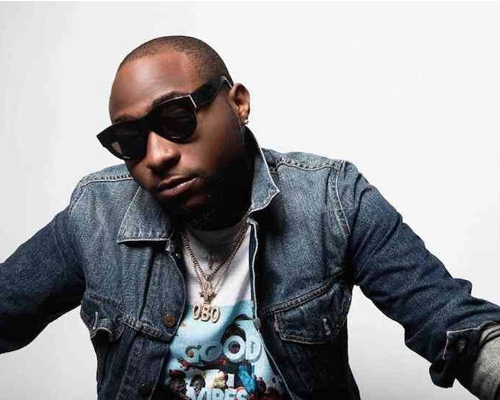 “If you nor get money, hide your face!
Make anoda man pikin come my way.
I love you, nor mean say make I put my hand for fire….”

The above lyrics resonated quite strongly with me when I first heard them because they reminded me of one of my favourites of the 80s by Gwen Guthrie, titled: *Nothing Going on but the Rent* . And she says:

” No romance without finance.
You’ve got to have a J.O.B. if you want to be with me…
A fly girl like me needs security….
I’ve got a lot of love give
But I will have to avoid you if you are unemployed.
Boy! Your silky words are sweet
But your pockets sure look empty.”

That’s how I became a fan of Davido. I am also a fan of Tiwa Savage because she turned down a big concert in South Africa in protest against xenophobia.

As a lover of lyrics, I promote good music, especially, music of the 70s, 80s and 90s but I must confess that modern Nigerian music has evolved to phenomenal levels. I was forced to acknowledge and recognise such world class productions by Nigerian acts. Apart from anything else, give it up for Davido, Tiwa Savage, Olamide, Phyno, Burnaboy and a host of others. They are quite good! That’s why they influence millions of people across the world.

In a country of over 200 million people, the ability to influence a sizable number of millions of people is a huge capital whether political, religious or economic.

Politicians spend a lot of money to influence the political decisions of voters. Religious leaders have also claimed a certain strange authority in the name of God to control people. And businesses spend billions of Naira, annually on advertisement, to promote consumerism among people. All of these are done to achieve the ability to influence people’s individual actions on a massive scale.

Influence is power because it causes people to do things. Influence can be exercised with money. Therefore money is powerful but no so powerful. Many religious and political demagogues in history didn’t have much money. They perhaps, simply exercised natural charisma, which outcome of its use, money couldn’t really buy.

Influential people are powerful for good or evil. Therefore, importantly, it is what is done with acquired influence that really matters. That’s why a certain religious leader’s influence in Nigeria has been a nightmarish decade of fending off Boko Haram’s terror.

Recently, Davido used his influence to gather over 200 Million Naira, added his own 50 Million Naira and decided to give it all to orphanages. That boy is surely crazy! And I love him. May God bless him. Don’t criticize him for announcing it or making the gesture public. I believe that’s his way of further influencing others to do what is good.

There are very many rich people who are not influential and that’s simply because they are self-centred. O yes! I agree that it has to start with you. You’ve got to take of yourself first and proceed to take care of your immediate family, extended family and neighborhood before considering what to do for the public in general. You’ve got to have money before you can give. But don’t make having money the ultimate goal. Money is an important tool of influence. You don’t have to have so much of it to make a difference in our dysfunctional world. I can testify to that with my brand of economic, cultural and social rights advocacy.

One of my benefactors, Toyin Dawodu, an American real estate mogul has supported me over the years with a sizable amount of dollars to campaign for social justice and improved political and economic situation in Nigeria. Toyin has decided to set up the African Political Action Committee (AFRIPAC) and made me its coordinator for West Africa (at least for now)

One of the goals of AFRIPAC is to identify good people with a heart for service to humanity and support them to take up political offices in African countries. To that end, I am compelled to quickly recommend that Davido be urged to go into politics. A man who could ingeniously and easily turn his influence into huge financial resources and decided to give it all, specifically to orphanages in Nigeria, will most likely do much better with public resources.

Political office holders shouldn’t be selfish people with a poverty complex that makes them steal public money. Giving they say is the evidence that a man has conquered greed. Selfishness and greed are the real reasons for corruption in public service.

Davido has shown a fine example of how to transform influence to service. His mindset is direly needed in the politics of Nigeria. He should be emulated by other successful star acts in the Nigerian showbiz scene. Therefore, AFRIPAC will make special submission to him, requesting that he strongly considers running for political office and will be sure to receive the international and local support of all those who want a transformative leadership in Nigeria.

Abdullahi Abba: PDP and the journey to Aso Rock