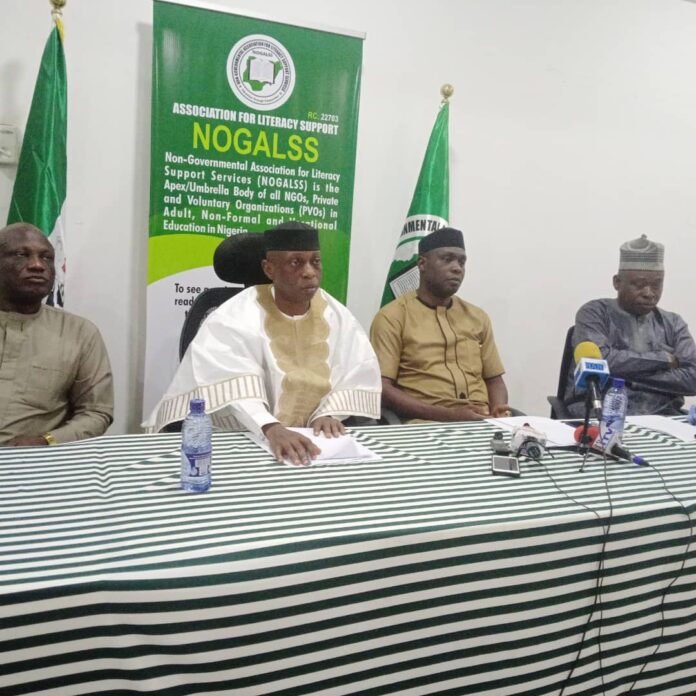 A coalition of Civil Society Organizations, the Non-governmental Association for Literacy Support Services (NOGALSS) is to unveil a literacy village in Abuja to address the menace of out-of-school children in the country.

The National President of NOLGALSS, Mr. Noah Emmanuel, made this known while addressing a news conference to herald the Induction into Educational Hall of Fame and Merit Award of Excellence of the organisation in Abuja on Friday.

Emmanuel said that the centres had been created in Adamawa, Ebonyi and the Federal Capital Territory (FCT) to ensure that the beneficiaries were directly highly maginalised people in the communities while saying that the centres would soon be cascaded to other states.

”The project is in partnership with UNESCO under EU-UN spotlight initiative, we are doing this in Adamawa, in FCT and Ebonyi and work is ongoing to see how to cover other areas in the country.

”So right now, we have minimum of 10,000 people enrolled in the three states and we are doing our best to ensure that the beneficiaries of this education which is called second chance education are directly the people that are highly maginalised.

”NOLGALSS’ desire is to use this occasion to increase individual participation in education, we want to use you to assist us in further advocacy to ensure more funds to assist Nolgalss to get the accurate data of out-of-school children in Nigeria,” he said.

Emmanuel said that the organisation would on December 14, honour some Nigerians who had positively contributed and supported the promotion of literacy and non-formal education in the country.

He identified those to be honoured as the former President, Goodluck Jonathan, Speaker House of Representatives, Femi Gbajabiamila, Gov. Nyesom Wike, Gov. Babagana Zulum, among others.

“Other personalities to be recognised include UNESCO, Leventis Foundation, Coca-cola Foundation Kadimiya Foundation and some serving and former governors and lawmakers who have distinguished themselves in the area of mass literacy and continuous education initiatives.

”People that have consistently helped in one way or the other to bridge the literacy gaps between rural and urban dwellers in their respective states and constituencies,” he said.

Also, the Director of NGOs, NOLGALSS, Yusuf Abdul said that in a bid to eradicate literacy in the country, NOLGALSS opened training centres in rural areas  to give opportunities for out-of-school children to learn.

Abdul, expressed worry over the recent alarming rate of out-of-school children in the country stressing that the training centres would help in bringing the children back to school.

”The position of NOLGALSS in this direction is that policies of government do not incorporate issues that require recognition that will make the policies to work.

”For instance, we gave an example of rainy season period when children of the farmers will leave school to help their fathers in their farm work, perhaps these fathers rely on these children as if they are their tractors working for them.

”And if this man did not carry out this farming exercise, himself and the children will not be able to eat so how do you take these children off the father.

”So, this the the area of NOLGALSS.
NOLGALSS in trying to eradicate and reduce illiteracy has decided to have literacy training centres in the very location where the out-of-school children are located.

”We follow the farmers to their settlement and train them there and we not only train them in the area of education but also teach them the relevant skills to appreciate schools in their various locations,” he said.

Ighoyivwi said that the domestication of the Child Rights Act would go a long way in addressing the problems of out-of-school children in the country. (NAN)