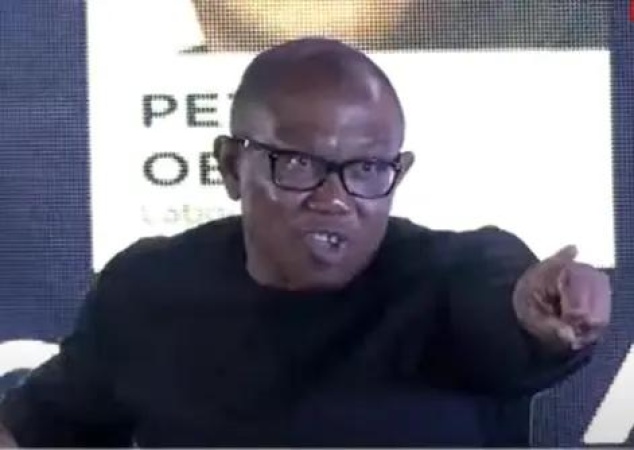 The presidential candidate of the Labour Party, Peter Obi, got angry on Sunday and lashed out at the spokesperson for the Peoples Democratic Party presidential campaign council, Dino Melaye.

This happened at the presidential town hall Series in Abuja on Sunday, organised by the Centre for Democracy and Development and Arise Television.

On hearing the words of the former lawmaker, Peter Obi snapped, “Stop that Dino. Why are you always calling me? I won’t take that. This man is from the ANPP. Why are you calling him Obi people?”

Dino feigned ignorance but Obi insisted that he would not condone such behaviour.

He told Melaye, “Stop that, I have taken enough from you here. Why are you always calling me?”

Other candidates present at the debate included the presidential candidates of the New Nigeria Peoples Party, Rabiu Kwankwaso; Governor Ifeanyi Okowa, who represented Atiku Abubakar of the Peoples Democratic Party, and Kola Abiola of the Peoples Redemption Party.

The presidential candidate of the All Progressives Congress, Bola Tinubu, was absent and had no representation.

Security and the economy took centre stage at the debate.

Speaking on his plans for security, Obi said he would have acted swiftly to rescue kidnap victims if he was the Commander-in-Chief, describing government response to kidnap incidents as weak.

Obi stated that he would also have a thought-out process and show empathy to the families of the victims.

He further stated that insecurity would have been reduced to the barest minimum if more people were taken out of poverty.

“I have said consistently that the more people you pull out of poverty, the more you reduce the criminality that is in the country,’’ he stated.

Responding to a question about what he would do to address graft, he stated, “I have always argued that they are doing what they are doing in a country where those people in government are richer than entrepreneurs. I served a state for eight years and you can go to that state and see not one day did I ever borrow from any financial institution in Nigeria. I was not in any position or have never been invited by anybody for questions about their missing money since the day I left office.

“I wasn’t owing anybody; any contractor that delivered his project, I wasn’t owing any supply that was delivered. I was not owing salary, gratuity or anybody. In three banks in Nigeria, Access Bank, Fidelity Bank and Diamond Bank, I left in each $50 million and over N10 billion for the state. I am like them as angry as they are that we must be able to chase out those where they passed nobody can account of what they were given.’’