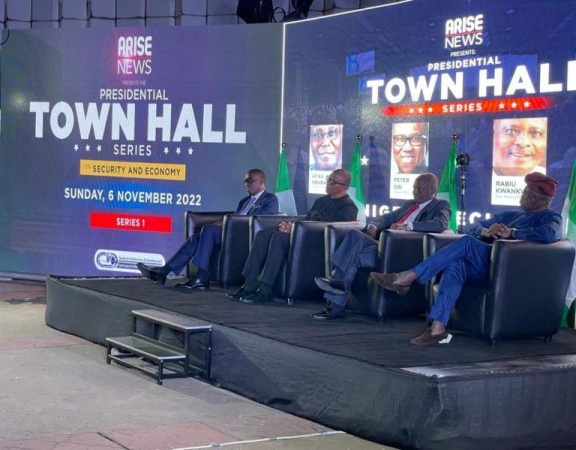 The event was put together by the Centre for Democracy and Development (CDD) in collaboration with ARISE Television.

While Atiku asked Governor Ifeanyi Okowa, his running mate, to stand in for him, Tinubu had no representative at the ongoing event.

There was a mild drama when some youths kicked against the presence of Okowa and insisted that only presidential candidates should be given the floor.

“We want only Presidential Candidates here,” they shouted on top of their voices as they booed the Delta governor.

Maintaining his calm, Okowa reached out to the audience, saying the presidential ticket is one, but the aggrieved youth thundered, “No!!!”

However, normalcy was later restored and the programme kicked off behind schedule.

The consensus among most viewres of the programme was that Obi carried the day.

This is not the first time Tinubu and Atiku would be absent at events meant for presidential candidates.

In August, Shettima stood in for Tinubu at the NBA Annual General conference at Eko Hotels, Victoria Island, Lagos state.

In September, Shettimma had represented Tinubu at the National Peace Accord.

In October, Shettimma represented Tinubu at an event organised by Women Radio 91.7 for major presidential candidates at the NAF Conference Centre, Abuja.

Atiku was also not at the Women Radio event.