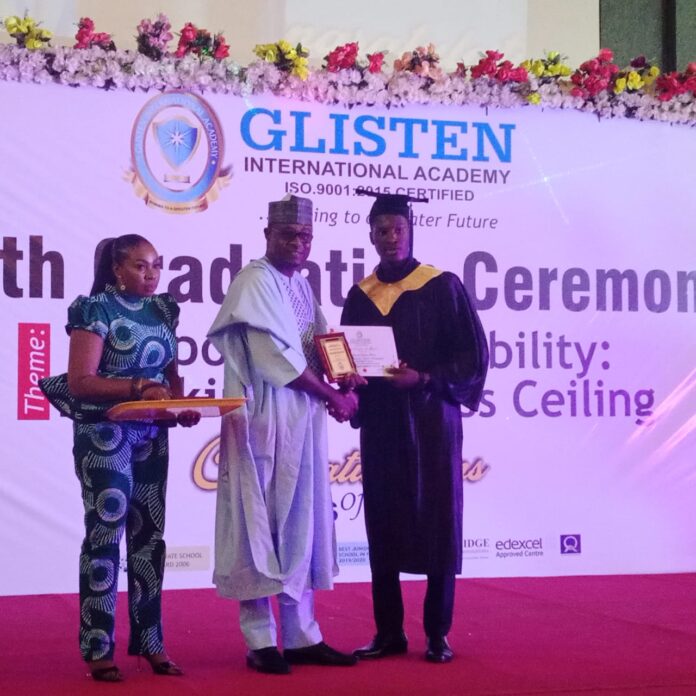 The Senior Special Assistant to President Muhammadu Buhari, Mallam Garba Shehu, has said that the presidency was working toward stabilising the educational system to get parent retaining their children to learn in the country’s tertiary institutions.

Shehu said this on the sideline of the 11th Graduation Ceremony of Glisten International Academy, in Abuja on Saturday.

The theme of the ceremony is tagged ” Exponential Visibility: Breaking the Glass Ceiling.

The special assistant whose son is also graduating from the school, advised the students to make good use of their studies

“For the graduating students, I want to say that they have a major decision to make which is going to the next level in their education pursuit .

“You can see that a lot of foreign institutions are extending invitation to the students at discounted rate to study oversees .

” I will say that Nigerian Universities are equally as good and even better and we are hoping that we will be able to stabilise the university education in the country so that parents don’t have to pay exorbitantly to educate their children abroad.

” Because university education in Nigeria should be the best for our children,” he said.

Shehu, while reacting to the recent extension of the strike actions by the Academic Staff Union of Universities (ASUU) by one months, called on parents to join the government in begging the union to return to classroom.

” It came like a bolt in the sky. We are shocked because it came at a time the president is giving full commitment to resolving the ASUU strike and having the students and teachers back in the school.

” The extension, I believe should not have been done because the spirit at which the government now is trying to resolve the problems of ASUU is such that there should also be a benefit of doubt in favour of the government on the part of ASUU,”” he said.

He, therefore, hoped that early resolution would be done so that normalcy would return saying the lecturers could return to classroom while discussions on their issues could proceed.

“The strike is unnecessarily extended and this should not have been the case.

“I want to advise parents to join government in begging asuu to end this strike as the government is doing its part and parents are worried and they should start talking to ASUU,” he added.

The Chief Executive Officer (CEO)of the school, Hajia Samira Jibir, said it was high time schools embraced technology as a medium of teaching.

Jibir advised the students to go out and shine to a brighter future as well as for them to value yourselves, immediate society
and the world at large.

” If we are to get it right, then as stated by JohnDewey, ‘If we are to teach today’s students as we
taught yesterday’s, we rob them of tomorrow”.

“Our today is ruled by technology, we then
must embrace and adapt to technological based education,” she said.

Also, the Chief Education Management Professional of the school, Mr Charles Eneh, said that the cognitive and inclusive learning method used by the school distinguished it among group of schools in the country.

Enemy said that the school had experienced graduation in the past 11 years and as such recorded improvements in its operations.

“It has been something that one can remember and I must tell you it’s been improving from year to year.

” Every year, there is something new and the quality of students we are producing is all about improvement

“In Glisten International Academy, it’s not just the cognitive we look at, the psychomotor are also given important. I must tell you, we operate an inclusive school, we practice differentiated learning and we make the students to think critically and bring out something.

The Chief Care Professional, Mrs Prisca Godwill said that the school monitored the academic progress of the school when they leave the country to acquire additional certificate and skills.

Goodwill said that the students also returned to the country after their studies oversea to contribute to the development of the country. 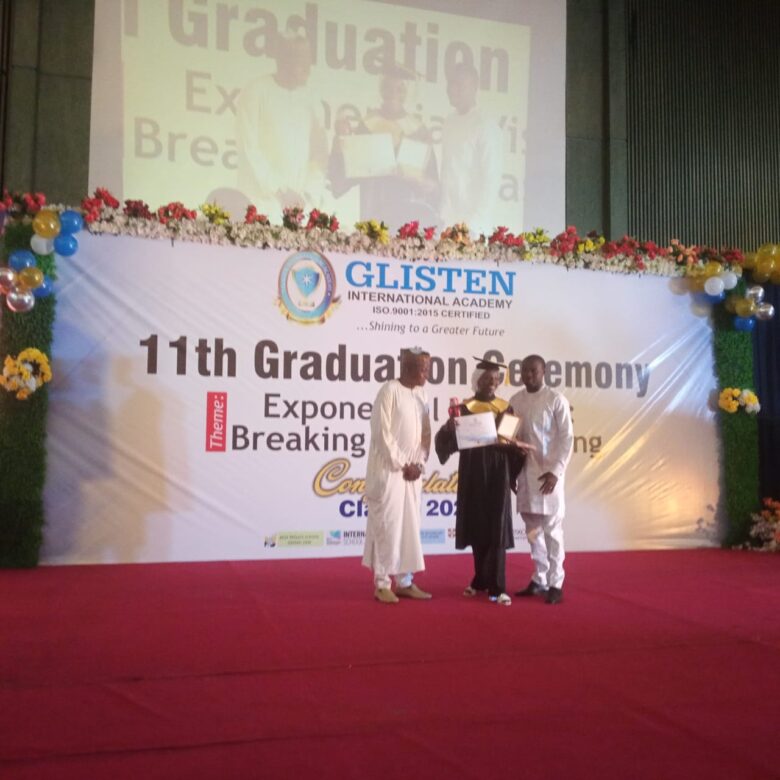 ” Most times when they leave the shores of the country, we have the alumni association so with this group will actually monitor the progress of the students.

” One way or the other, we have what we call progress report and sometimes we get feedbacks from schools calling directly and the response we get has been amazing,’: she said.

Some of the best graduating students expressed their joy as they were been called out to receive awards for their outstanding performances throughout their time in school.

Mr Ahmed Khalifa, the overall best graduating student thanked those that played one role or the other in the realisation of his success.

‘I an honoured for the opportunity I have gotten from everyone, both my parent, the management and staff of the school to the stage that we are.

“And we hope that in the higher institutions we will be able to manifest and become who we wish to be tomorrow,” he said.

The News Agency of Nigeria (NAN) reports that Aasiya Siddiqui and Jemimah Oshadami came second and third position in the overall category.

Some tertiary institutions such as the Philomath University Abuja, Canadian University, Dubai, American University, among others have offered scholarships to students of the school based on percentage.(NAN)