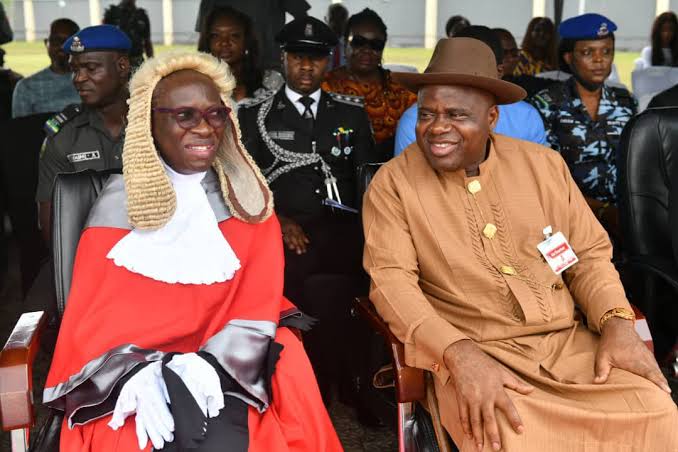 The Chief Judge of Bayelsa State, Justice Kate Abiri, has revealed that Governor Douye Diri has started implementing the processes of granting financial autonomy to the judiciary arm of government in line with the country’s constitution.

Abiri made this known while declaring open the 2021 Law Week of the Nigerian Bar Association, Yenagoa Branch, with the theme, “Judicialisation of Politics in Nigeria: Trends, Challenges and Opportunities.”

She said the governor told her to stop taking memos to him for approval of funds like members of the State Executive Council as he would ensure the judiciary got its revenue as an arm of government.

Abiri lamented the ongoing national industrial action embarked upon by the Judiciary Staff Union of Nigeria (JUSUN) demanding financial autonomy for the judiciary.

According to her, the judiciary workers’ strike, which commenced on April 6, had adversely affected the law courts and general administration of justice, especially litigations and litigants.

The Bayelsa Chief Judge said, “On a very, very cheery note, I want to also say that when the (state) Attorney-General was making his goodwill message, he told us of the willingness of His Excellency (Governor Diri) to comply with the constitution.

“I wish to announce to us that he has already begun to comply with the constitution on autonomy of the judiciary. He told me that, ‘look, I don’t want you to bring any memo to me like other commissioners will be doing, I don’t want it. I will send your money to you, particularly for capital (expenditure), quarterly, and for the overhead, monthly, which is the usual thing.’ And this, he promised to do in February.

“The thing is that this (judiciary workers) nationwide strike, you can see, is affecting the federal courts that have not been affected concerning autonomy. So, it is like this is a sympathy strike by the Bayelsa State Judiciary among other states that are not complying.

“So, we pray that it will come to an end soon. There are talks ongoing concerning it. By the very special grace of God, when His Excellency the President established the task force that looked into the implementation of the autonomy, I was one of the members in that task force.

“And we did everything, the three arms of government were part of it. And that was the product of Order 10. It was after it came into force that the governors waded in; that how can it be explained that, constitutionally, the Accountant-General of the Federation should be allowed to deduct a state’s funds directly to the arms of government.

“We believe we will get to a point where we will all smile because these (judiciary) workers are unrelenting. They don’t want to go back (to work) until it (autonomy) is implemented. We pray that this will come to an end because it is affecting businesses, not only the legal profession.